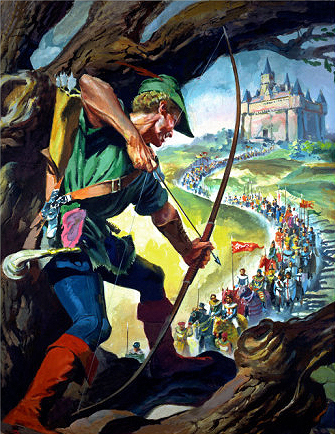 He robs the government to feed the poor.
"An unjust law is no law at all."
— St. Augustine of Hippo
Advertisement:

The living embodiment of Screw the Rules, I'm Doing What's Right!, Chaotic Good characters are rebels and free spirits who believe in doing good, by their own standards. Some don't have a problem with greater systems such as laws as long as they leave them alone; others are anarchists who believe that the betterment of all can only be achieved by actively rejecting any higher instances of power. Likely to take an intuitive approach to The Golden Rule, caring about other people's feelings and needs without having to calcify it into specific rules.

Some flavors of Chaotic Good include:

Unfortunately, characters of this alignment are the most likely good characters to be opposed by the Hero Antagonist.

An important aspect of Chaotic Good freedom fighters is that they excel in toppling corrupt regimes, but are often pretty terrible with power and responsibility themselves (as some of the examples show). A Chaotic Good character faces a tightrope walk even more narrow than most Lawful Good characters face because of their competing interests in being a free spirit that wants to do good in the world, and their general disdain for the authority and control over people's lives that they would be wielding to try to do that good. Generally, one of several things happens because of this:

If you have a difficulty deciding which alignment a good-aligned character belongs to, the main difference between Lawful Good, Neutral Good, and Chaotic Good is not their devotion to good, but the methods they believe are best to promote it: Chaotic Good character types typically include:

Others, such as All-Loving Hero, Ideal Hero, Small Steps Hero, and Friend to All Living Things, can vary between Lawful Good, Neutral Good, and Chaotic Good.

Chaotic Good does not mean Aggressively Good. While there are several Chaotic Good Anti-Heroes, one does not have to be one to be Chaotic Good, and both Lawful and Neutral Good have Anti-Hero examples as well.

When dealing with the examples of specific characters, remember that assigning an alignment to a character who doesn't come with one is pretty subjective. If you've got a problem with a character being listed here, it probably belongs on the discussion page. There will be no real-life examples under any circumstances; it just invites an Edit War. Plus, real people are far too complex and multi-dimensional to really be classified by such a straightforward alignment system.

open/close all folders
Anime and Manga
Comic Books
Batman's alignment has always been hard to define. He could be considered lawful because he obeys a strict code of justice, but he could also be described as chaotic because he operates outside of the law as a vigilante.
Fanfic
Film
Folklore
Literature
Live-Action TV
Music
Musicals
Tabletop Games
Theme Parks
Video Games
Webcomics
Web Original
Western Animation