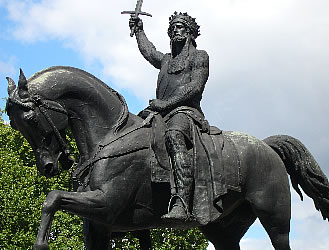 Statue of Richard by Marinetti outside Parliament.
"Spread your wings
King of the kings"
— "Lionheart" by Grave Digger
Advertisement:

King Richard I of England, called Cœur-de-Lion (or the Lion-Heart(ed)) in French, was born at Oxford, England, September 8, 1157, and died at Chalus-Chabrol, France, April 6, 1199. The son of Henry II of The House of Plantagenet and Eleanor of Aquitaine, Richard came to the throne in 1189, and thereafter spent no more than six months of his ten years' reign in England. Both in his life and after his death, Richard's reputation has fluctuated wildly, from champion of Christendom and paragon of chivalry to blood-thirsty butcher, from beef-witted thug to poet and musician, from feckless political blunderer to shrewd diplomat and statesman, from insatiable womanizer to (latterly) insatiable... er... man-izer. Nevertheless, one aspect of his fame has remained constant — his reputation as a particularly badass warrior, one which resonates to this day: along with Edward the Confessor and William the Conqueror (Alfred the Great wasn't King of England, per se), he is one of the only Kings of England to be more usually known by his epithet rather than regnal number.

Richard's political career began when he was enthroned as the ruler of his mother Eleanor's duchy of Aquitaine (his elder brother Henry being the inheritor of his father's kingdom and duchy of Normandy). Their father's refusal to share power drove both boys to join their mother in rebellion against him; even after Prince Henry (the Young King) died, the rebellion smouldered on to no real conclusive effect, until Henry II died in 1189, his heart broken (it was said) by the rebellion of his sons — particularly John, his youngest and favourite.

On coming to the throne, Richard immediately took in hand the greatest of his projects — the preparations for the Third Crusade (the so-called "Crusade of the Kings," as it was to be jointly led by Richard, King Philip II Augustus of France, and the aged Emperor Frederick I Barbarossa of the Holy Roman Empire). Unfortunately for the Christian cause, Barbarossa died en route (either drowning or succumbing to a heart attack in the river Saleph in Turkey) and the Kings of France and England, who had already quarreled when Richard had refused to marry the French king's sister Alice to whom he was betrothed (on the not entirely unreasonable grounds that she had been his father's mistress for years), refused to pull together, and were in fact plotting against each other continuously until Philip's early departure. Richard stayed on, winning some victories, both military and diplomatic, against his great Muslim opponent, Saladin, but unable finally to recapture Jerusalem or to gain any decisive dominance for the Christians in the Holy Land. News of his brother John's intrigues with Philip forced him reluctantly to withdraw.

On his way home, he was captured by Leopold I, Archduke of Austria (whom he had insulted in the Holy Land), and held to ransom by Leopold and his master, the Emperor Henry VI. During his captivity, he wrote a song about it — "Ja Nus Hons Pris

" (perhaps channelling his great-grandfather William IX, Duke of Aquitaine, a noted troubador). He was released two years later after secretly swearing fealty to the Emperor and openly paying a huge ransom, collected by his mother; John's conspiracy against him immediately collapsed.

The final five years of his reign were spent fighting against Philip's incursions into various disputed territories in France, his death occurring as a result of a crossbow bolt to the shoulder at the siege of a not particularly important castle during a side campaign against the rebellious Viscount of Limoges. The surgeons removing the bolt bungled the operation; gangrene set in, and Richard died, reportedly forgiving his killer — who was nonetheless supposedly flayed alive after the king's death by Richard's enraged followers. He was succeeded by John.

Since Tudor times, Richard has been associated particularly with the Robin Hood legend, often as a mostly-unseen Big Good whom Robin remains loyal to, regarding John as a pretender. However, most modern scholars associate Robin with one of the Edwards — and Richard, at any rate, saw Sherwood Forest for the first time only after his release from captivity and second coronation in 1194. Nevertheless, many retellings feature him pardoning Robin, often after Robin has been involved in foiling an attempt by John to usurp the throne.

In popular culture, Richard usually appears as the Crusader king. In older works he is apt to be treated positively as a chivalrous figure and just ruler, but later works tend to be more cynical. This possibly reflects the modern historical view of him as a lousy king who was uninterested in actually governing his kingdom. During his reign, he was hardly ever in-country, preferring to fight his wars, but even then it is worth noting that due to factors such as the court of the Angevin Empire being held in Angers or Chinon and him viewing the Duchy of Aquitaine as his home, even if Richard's reign had not mostly consisted of military activity, he would not have been in England that often. However, he was reputedly a gifted military leader; a Muslim contemporary wrote, "Never have we had to face a bolder or more subtle opponent."

Fun fact: American President Richard Nixon was named after him.

Works associated with Richard the Lion-Heart in the Robin Hood mythos:

Works associated with Richard the Lion-Heart apart from Robin Hood: