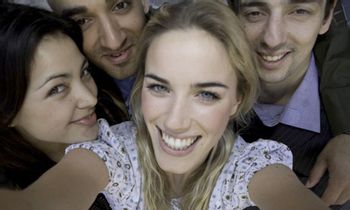 We always put a frame around everything. It's how we make sense of things. Delineating things. It's useful but it causes a lot of problems. Everything has a beginning and an end.
Kate
Advertisement:

KateModern (one word, CamelCase; also known as in the name of ...KateModern) is an online drama series hosted by Bebo, something of a cross between a Soap Opera and a cult TV show, told entirely through video blogs posted by the characters.

The story begins when Kate, a 23-year-old art student living in London, posts a series of videos about her life, her friends and her artwork. In one of these videos, she reveals that she has a secret: her name is not really Kate. One Thursday, she goes to visit a specialist about an abnormality in her blood, and wakes up in her bed the following Friday evening with no memory of anything that happened that day. Dismayed when her boyfriend Tariq Bhartti and her best friend Charlie believe that she was off with her ex, Kate goes to research memory loss and encounters Steve Roberts, a man who claims to have been suffering from memory loss all his life. Charlie, however, is suspicious of Steve, considering him a creep.

Meanwhile, Tariq and his friend Gavin Taylore have quit their jobs and plan to set up a new IT business. After various setbacks, they manage to rent an office, Gavin having mysteriously obtained a loan from a rather sinister someone. However, Tariq is more concerned with Kate and her memory loss, and believes there is something suspicious about "Creepy Steve", who he discovers is a member of a new religious movement, the Hymn of One. Researching on the Internet, he finds rumours that the Hymn are connected with a shadowy "Order" who were responsible for the death of a girl in America. Deeply uneasy, he confronts Steve, who dismisses this as a hoax.

As the series continues, various other characters are introduced, such as Lee Phillips, a work experience boy; Dudley Griffin, a man who poses as a police officer; and Sophie, a Bebo user who is a fan of Kate's videos. The series is initially concerned mainly with the everyday lives of the characters, but gradually introduces more plot elements, forming an overarching Myth Arc.

KateModern takes place in the Breeniverse, the same universe as lonelygirl15, and includes occasional references to that show; the two crossed over in April 2008. However, the two are very different in style, and it is not necessary to watch lonelygirl15 to understand KateModern. The show ended on the 28th June 2008, with a suitably epic 12-part Grand Finale, entitled "The Last Work

KateModern may be watched on its Bebo profile