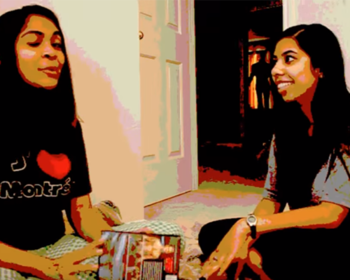 I don't think he was invited.
Every night I close and lock this door, and every morning this week it's been open. I have two deadbolts. [...] I have to figure out what's going on.
Advertisement:

Story Parker is kind of new to the YouTube beauty guru scene, but her passion for cool and quirkily-painted nails leads her to create a manicure channel nonetheless. Her first view videos go over quite well, until she starts receiving gory trinkets in the mail, losing periods of time, and repeatedly seeing a tall, thin someone out of the corner of her eye....

As she records and investigates the increasingly unsettling occurrences that seem to be following her, Story finds herself embroiled in the elaborate workings of a pharmaceutical company called Ajax, whose pill "Vivirten" is supposed to prevent patients from seeing the Slender Man, but which sometimes has the entirely opposite effect.

Keratin Garden was another addition to the Slenderverse, and notable for being one of the few 'Verse contributions to feature a primarily-female cast. Unfortunately, after an extended hiatus (beginning in 2015), the series was officially ended by its creator.