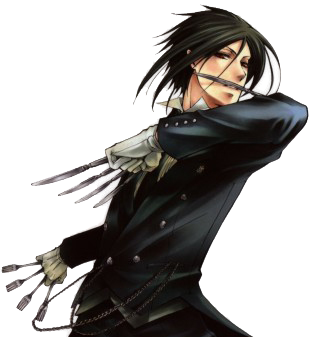 Don't worry, he'll polish the silverware spotless after he kills you with it.
"There were only two men on the planet better educated in the various martial arts than Butler, and he was related to one of them. The other lived on an island in the South China Sea, and spent his days meditating and beating up palm trees. You really had to feel sorry for those goblins."
— Artemis Fowl: The Arctic Incident
Advertisement:

A household or personal servant note Often either a high-ranking one, as most actual butlers are, or the only one employed by their master who acts as a "combat effective" despite their official position having nothing to do with combat. May overlap with Almighty Janitor if said butler/servant is the only one hired in the household, but if said butler/household servant is the head servant of the household, then this trope will also overlap with Asskicking Equals Authority, because he or she is granted the position to command the other servants because he or she can personally protect the master of the manor.

If a Battle Butler is female she will probably wear a suit, even if she is called a maid. If she does wear an appropriate maid outfit, she is a Ninja Maid. If a Battle Butler is also referred to as a bodyguard, you can expect full blown samurai-level abilities; this type of Battle Butler tends to overlap with The Dragon if their master is the Big Bad.

If they come from a long line of Battle Butlers serving that family, they're in a Legacy of Service.

Not to Be Confused with Hayate the Combat Butler, although the eponymous character is definitely an example.