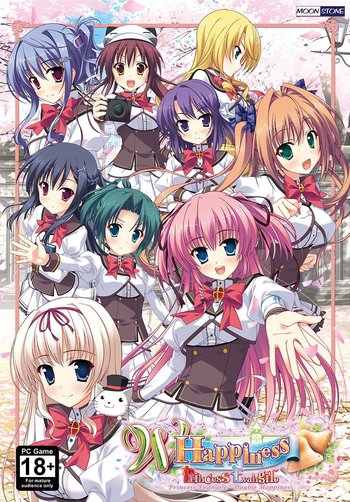 The cover for Princess Evangile: W Happiness. Clockwise from left: Ayaka,Tamie, Mitsuki, Marika, Chiho, Rise, Ruriko, Konomi, and Ritsuko
"Salutations. Would you like to attend a school for girls?"
— Opening to the original Princess Evangile
Advertisement:

Princess Evangile is a Visual Novel developed by Moonstone with its first release in July of 2011. It was officially picked up by Mangagamer and released in March of 2015.

Down on his luck and with a fifty million yen debt placed on him by his father, Masaya’s prospects aren’t looking too good. After using all the money he has in the world to buy a fish sausage, he splits half of it with a cat and then notices a girl named Rise being harassed by a severe looking “man” in a suit. After coming to her rescue, she treats him to dinner. Though a temporary respite, this isn’t going to solve his problems, though he remembers that his father had bought a lottery ticket. Checking the numbers, he realizes he’s won the grand prize and rushes off to try to cash it in. In the meantime, a few thugs set their eyes on Rise, who is wearing the uniform of Vincennes, a rich all girls school. Masaya returns to fight them off and she makes him an offer: If he enters her school on a trial run at gender integration, his food and boarding expenses will be paid for throughout the year. He jumps at the chance, nudged along in part by an odd feeling that he remembers this girl from somewhere.

However, things aren’t quite as easy as she had stated. He has until the end of the first term to convince the female students to allow him to stay. Not helping things along is the headmistress’ personal hatred for Masaya and the extremely popular and supposedly neutral student council president aiming to get him kicked out. If he makes it past that, he has until the end of the year to convince the student body that Vincennes needs to open up to both genders. You see, the school is on the verge of bankruptcy after remodeling work and a declining number of student applicants. However, traditions die hard and the school is firmly entrenched against him and male students in general. It’s up to Rise, Masaya and a few associates to convince the school to open up. Otherwise, he’ll be forced to transfer out at the end of the year.

A fandisk/sequel, Princess Evangile W Happiness, was released in Japan on June 2012. It contains the common route (for those who haven't read through the original VN), routes for the five girls that didn't get routes in Evangile (Konomi, Marika, Mitsuki, Ruriko and Tamie) and epilogues for the ones who did (Rise, Ritsuko, Ayaka, Chiho). An English translation by Mangagamer was released in July 2017.

Not to be confused with the similarly named Princess Waltz.