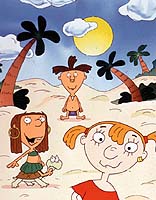 "Ain't no burger stands, ain't no disco bands, on the island where nobody goes."
— Opening theme
Advertisement:

One of the last of Cartoon Network's original lineup of Cartoon Cartoons, airing from 1999 to 2001.

Set on a desert island, Mike, Lu, & Og revolves around the three titular characters: Mike, a foreign exchange student from Manhattan; Lu, a self-appointed princess; and Og, a boy genius. Secondary characters include the rest of the native tribe (who, perplexingly, speak with British accents; the concept seems to be that they are the descendants of a British shipwreck who have gone native), a trio of incompetent Pirates (possibly the descendants of the pirates who caused said shipwreck and were then wrecked themselves), and Lu's long-suffering pet turtle, Lancelot.

Example of:
Cave Behind the Falls