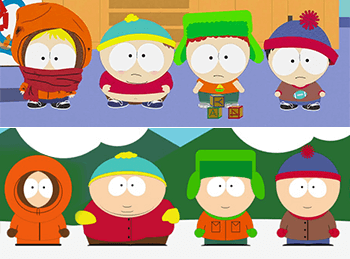 Look familiar?
"I guess our clothes are magic fabric, they grow with us."
"No, our moms just made bigger ones as we got older. 'I want one just like this only longer!'"
— Commentary on the dub of Soul Eater, Episode 23
Advertisement:

Limited Wardrobe taken to its logical extreme. This is when a character flashes back to their childhood (or just their "younger days"), or the work shows a scene from the character's future, and they're wearing the exact same (or almost exact) style of clothes that they wear in the present.

Can be Truth in Television for some individual items of clothing, if they're expensive and durable and/or have some sentimental value. Compare Weapon Jr.