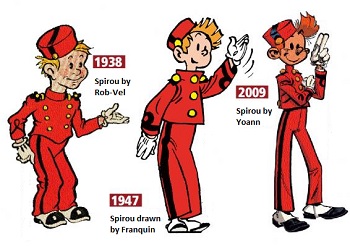 Fashion is merciless. It beguiles kings and makes them slaves. It should come as no surprise that in the space of years (if not months) a perfectly fashionable dress or suit can go from tres chic to horrible; what is surprising is when someone keeps wearing said outfit... for over fifty years!

No, this is not the White-Dwarf Starlet, but rather a character who is identified with a type of outfit (or just one) and have kept the look for far too many years without getting an update. This is common in Comic Books where the story is set in the "Present Day" and the clothes become hilariously anachronistic.

If they ever do get some new duds, expect much poking fun at their hilarious past fashion sense, while said character adamantly maintains the look is "still cool!" and it's the world that's out of touch. On the flip side, if the outdated outfit has become an intrinsically linked part of the person's image, it can lead to fans crying that they should have stuck with the old clothes.

See also Grandfather Clause. Compare Awesome Anachronistic Apparel, where a character's clothes are so cool that, while they may be out of fashion, they are certainly never out of style.

See also Unintentional Period Piece and Popularity Polynomial. I Was Quite a Fashion Victim is what happens when a character does move on and is horrified by their previous costume.

Contrast Fashions Never Change and No New Fashions in the Future.