Film / The Toll of the Sea 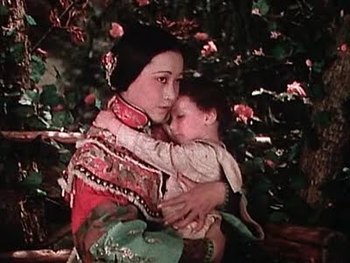 The Toll of the Sea is a 1922 silent drama film loosely based on Madame Butterfly (it however isn't the first film adaptation of the opera, as Mary Pickford starred in a truer incarnation six years earlier). It was Anna May Wong's first leading role. The film is especially notable for being the second technicolor feature film. The first one was the lost film The Gulf Between from 1917.

The film centers around a young woman known as "Lotus Flower" who lives in China in the late 1910s and early 1920s. She saves an American soldier from a shipwreck and marries him soon afterwards, despite the disapproval of her peers. Her husband Allen Carver leaves for sea and doesn't come back. Three years later, Lotus Flower is raising a toddler-aged son alone while she waits for her husband to come back and take them to America. One day though, a letter arrives from Allen saying that he's coming back to China. Lotus Flower and her son wait patiently, oblivious to the fact all is not right.

The Toll of the Sea was considered to have been lost in the 1967 MGM Vault fire incident, however a copy was rediscovered in 1985. That copy was missing the final two rolls, but thankfully it was just a sunset scene so a similar scene was filmed to emulate the lost one.