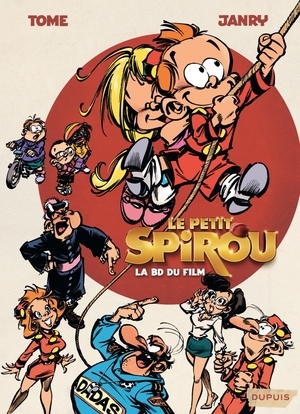 Le Petit Spirou is a Belgian Comic series that started off as a spin-off to the iconic Spirou and Fantasio comic book series. It is drawn by Tome and Janry, the same duo who drew Spirou & Fantasio around that time.

At first glance Le Petit Spirou appears to a typical baby knock-off of a franchise built around adult characters. Spirou in this series is a little boy in elementary school and all the stuff that happens to him is typical everyday pre-highschool kids' stuff: doing homework, suffering through class, playing on the playground or outside. The difference, however, is that, apart from Little Spirou himself, no other characters from Spirou and Fantasio appear here in child versions. It's not even entirely clear whether Spirou is actually the younger version of the adult Spirou, or really his son. Most stories seem to imply the former, since Spirou's adventures have some very outdated elements, such as a Catholic priest trying to teach them morals. On the other hand modern facilities such as television and video games do seem to exist, so it keeps people wondering...

Another huge difference is that the series is not an adventure comic series. It's a Gag Comic with one gag per page. But most of all, and this is the reason for the series' popularity, many jokes revolve around Bawdy Comedy and sexual innuendos; stuff that would outright not be child-friendly. Though never obscene, it's still far more naughty and subversive than the original Spirou and Fantasio. To give another example, the aforementioned Catholic priest is often depicted as being a hypocrite who doesn't really shy away from looking at sexy women on the sly (and is even implied to have an illegitimate son), all the while attempting to catch the kids in what he considers heinous acts (some of which, he's right on the money on).

The comic was adapted into a 78 episode animated series. There is also a live-action movie adaptation that was released in the fall of 2017, starring Sacha Pinault as Spirou and Pierre Richard as his grandpa.

The Comic Book
The Animated Series