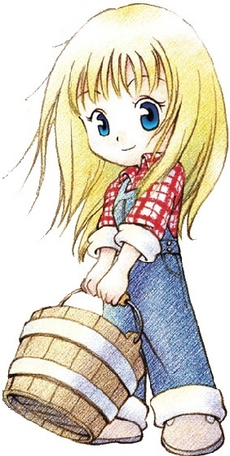 When a male character is from a rural setting, a common visual shorthand to establish this is to put the character in denim overalls. For bonus points, put him in a checked shirt (often made of gingham, a medium-weight checked cotton). He normally wears a hat; straw in a historical setting, a baseball cap if he's from a modern farm.

Female characters from rural settings, depending on the time period, may wear either denim or gingham. Tomboys and/or modern characters will often wear denim jeans or overalls; Ms. Fanservice favors denim "Daisy Dukes" (ultra-short shorts). More "feminine" characters, or those from times that didn't approve of women in pants, will wear gingham dresses. Either version is the normal attire of the Farmer's Daughter.

It's usually safe to assume a character dressed in denim or gingham will share some of the common rural traits. Whether they're negative or positive traits will depend on the approach the rest of the work's taking. If rural values are approved of, expect common sense and practicality from a man in denim overalls or a woman in a gingham dress. If not, characters dressed that way will tend toward strongly conservative, bordering on (or all the way to) Luddite views. On the darker side where Hillbilly Horrors lurk, this may be combined with a rugged yet simple mask to form a Sackhead Slasher.

There's a certain amount of Truth in Television here. Denim is a practical fabric for farm work, as it's washable and can take abuse. Gingham for the ladies isn't as tough a fabric, but it's still washable — and usually a woman in a gingham dress is working around the farmhouse, not plowing. It may have become popular because it's a little more fancy than a solid-colored fabric while still being very easy to make (and therefore cheap). 1800's farmers commonly wore a straw hat ... but so did most men during the summer (wearing a hat when working outdoors in the summer is sensible, and straw hats are cheap - for a farmer, it might not cost anything beyond the time needed to weave the straw he grew last year anyway into a hat). And baseball caps can be seen everywhere, city as well as country.

This trope is specifically for cases of denim/gingham attire as shorthand for "this character is from a farm". City teens wearing $300 fashion jeans need not apply.

Contrast with Sharp-Dressed Man or Socialite, both of whom are urban characters.