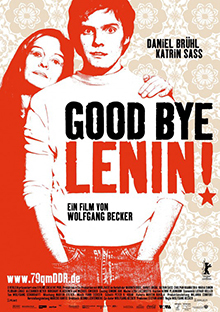 Shortly before the fall of the Berlin Wall, the young East German Alexander Kerner's dedicated Communist mother, Christiane, sees her son in an anti-government demonstration and falls into a coma due to a heart attack. When she awakens eight months later, the doctors tell Alexander that his mother cannot abide a new shock. Alexander therefore orchestrates an elaborate ruse, complete with fake television programs, to keep his bed-ridden mother from finding out that the GDR is gone.

Good Bye, Lenin! is a German bittersweet comedy from 2003, directed by Wolfgang Becker and starring Daniel Brühl. Has a lot of subtle humor, playing on the feeling of shell-shock many East Germans felt upon being catapulted into the capitalist world and the almost overnight disappearance of their country. Many of the visual clues might be easy to miss for people not familiar with the common cliches about the GDR. The film also was Brühl's Star-Making Role.