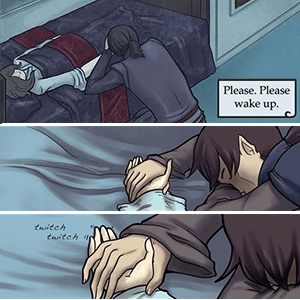 So...you're unconscious. That sucks for you, huh? After all, this is probably the result of being banged on the head, having some horrible illness, or just being so injured that you can't voluntarily wake up or move around. The doctors around you are talking openly about the likeliness of you never waking up. Bye-bye, you.

But wait! You're not licked yet! As you slowly begin to rouse yourself, a telltale sign of your impending consciousness will show itself. It will often go unnoticed, perhaps when everyone has turned away. But it will indeed happen: your fingers will twitch back to life.

This is an extremely common trope, usually done in extreme close-up on the hand as a last-second Cliffhanger of a scene or even the entire show/film. The dual categories of whose fingers could be twitching determines the tone of this trope. If it's a hero or a love interest, this is a moment of renewed hope and happiness (and usually is then immediately followed by the full wake-up scene); if it's a villain, the moment is a threat. The ubiquitiousness of this trope covers up the fact that twitching fingers may not always be the most likely part of the body to first signify someone's revival - eyes could open, shoulders could adjust, chest could rise and fall with breath. But even when the arms and fingers of a character have been significantly hurt, and are even bandaged up or suspended in one spot, this is more often than not the way we'll be shown that the character is coming back to his/her senses.

See also Playing Possum, No One Could Survive That!, Raised Hand of Survival, and The End... Or Is It?.

Compare to Eye Awaken, which this may be used along with. Additionally, by its nature, this is more often than not a spoiler trope.

Could also potentially be horrific if the character whose finger twitches goes completely unnoticed. Those around could go on to assume that the character is deceased and treat them as such. This can then lead to many situations like abandonment, burial, cremation and the likes... all while the character is still alive.

Movement as proof of life, incidentally, is not always Truth in Television: Creepily enough, even dead bodies can sometimes move or make noise caused by the contraction of tendons and the presence of gas escaping from the corpse. Burned bodies often curl into a fetal position as the tendons dry and contract, which can give rise to stories of deceased persons suddenly "sitting up" on the pyre.

When this happens because of Special Effect Failure revealing that the "corpse" is a live actor, that's The Living Dead.