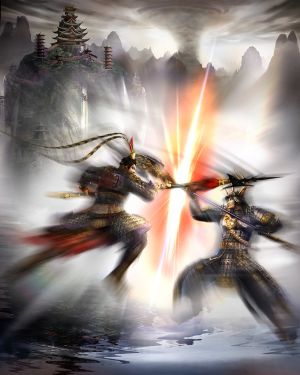 Ultimate Badass vs Ultimate Badass
Warriors Orochi (Musou Orochi; lit. "Unmatched Orochi" in Japan) is a Massive Multiplayer Crossover, Hack and Slash video game series made by Koei, crossing over their historical Warriors series (Dynasty and Samurai), with the addition of several original mystical characters sourced primarily from the Japanese and Chinese mythologies and folktales here and there. In the fourth installment, the series begin delving into Western mythologies, including Greek and Norse.
Advertisement:

In contrast to other Warriors games, Warriors Orochi features a tag team system, which allows the player to take three characters and have them fight as a single unit on the battlefield. The characters are divided into three different types: Power, Speed, and Technique, which dictate their fighting styles. Warriors Orochi 3 had a fourth type, Wonder, but it did not return in future installments.

The story primarily centers on Orochi, the Demon King (or Serpent King in Western releases), who assembles warriors from the Three Kingdoms and Sengoku Jidai into a dimensional world born of chaos, where he entices them to fight both against each other and himself. Later installments put focus on other villains as Orochi is increasingly relegated to the background, although he usually has some role in the story.

Advertisement:
Games
Having been freed by the fox demoness Da Ji, Orochi creates a world inside the void where he unites the warriors of the Three Kingdoms and Sengoku Period. Orochi uses his demonic army to uproot them from their homes, scattering them to the four winds; some warriors are forced to serve him, while others form resistance groups to fight for another day.

In a first for a Warriors game, it utilizes a three-man team, allowing players to switch character in-game as they see fit, although you will still get a KO if your current character is defeated. A "True Musou Attack" will be triggered if players switch to another character while the previous one has initiated Musou Attack, causing the next one to perform a stronger version of the attack. In addition to traditional level up, characters can be upgraded individually by using the spare experience points (known as the "Proficiency" system). There is also a "Weapon Fusion" system, enabling players to craft better weapons from existing ones. Finally, each character has a unique personal item that can be used to enhance their abilities, though getting them in the first place is a notoriously difficult affair.

The game features a total of 79 characters, consisting of 48 characters from the Dynasty side and 29 characters from the Samurai side, plus two new additions. The characters are based on their appearances from Dynasty Warriors 5 and Samurai Warriors 2 (barring Goemon Ishikawa, Kunoichi, and Yoshimoto Imagawa, who don't appear in SW2 and as a result use their models from the first Samurai game). Each character is classified into one of the three types: Power, Technique, and Speed, which utilizes the R1 button input to deal a Type Action ability. Power characters are Mighty Glacier who can expend their Musou Gauge to perform a Special Art, which comes with a limited invulnerability. Technique characters are a Critical Hit Class who can sidestep while blocking and perform critical hits on airborne targets. Speed characters are Fragile Speedster whose unique ability is an air dash called "Aerial Thrust".

The Story Mode is divided into four campaigns; three are focused on one of the Three Kingdoms, while the remaining one is reserved for the Samurai faction. Each campaign consists of eight main missions and seven Sidequests (labeled as "[number]-X"). Six sidequests are unlocked as you progress through the main story, while the last one is unlocked by fulfilling a hidden requirement. It should be noted that while characters are grouped by the factions they belonged in the original games, character alignment is very fluid in-story, and warriors both Chinese and Japanese cross over into each other's factions. Chronologically speaking, the story begins In Medias Res; we never actually see the worlds colliding and Orochi's initial invasion, instead starting from when the various resistance groups begin to stage guerilla warfare.

After Orochi's defeat, the warriors' attempt to rebuild their lives is interrupted when his followers immediately begin to resurrect their master, recruiting more allies from various time periods. In response, a trio of Mystics descend from the Mystic Realm to guide the warriors in their rematch against Orochi.

Considered a Mission-Pack Sequel to the original in Japan, known as Musou Orochi: Maou Sairin ("Unmatched Orochi: Rebirth of the Demon King"), the game was marketed as a sequel in the West. It otherwise uses the exact same engine as the original, though there are a couple of gameplay additions. Two new abilities involving the team configuration are added: Support, a defensive move that sacrifices an inactive character's Musou Gauge to shield the active character from attacks, and Triple Attack, which utilizes the three characters' Musou to deal a combination Musou Attack.

The game adds fifteen new characters to the roster, including the five new additions from Samurai Warriors 2: Xtreme Legends and two reworked bonus characters from Dynasty Warriors 3. Combined with the 79 from the previous game, it adds up to 94 characters.

Story Mode is made up of five campaigns, consisting of the four from the original and a new "Orochi" campaign, a Prequel that focuses on the Demon King's onslaught on the warriors of Three Kingdoms and Sengoku Period from his perspective. Sidequests are no longer integrated into the Story Mode but instead figure into the new "Dream Mode", which has no relevance to the main story, but whose completion is required to unlock Orochi X. The game also adds Survival Mode, pitting the players' team against a CPU team, and a VS Mode, where two players compete against each other in minigames.

The Japanese PSP edition features the Fury forms from Dynasty Warriors: Strikeforce as unlockable costumes for Zhao Yun, Sun Shang Xiang, and Xiahou Dun. The international PSP version, on the other hand, incorporates content from Musou Orochi Z, which was never released outside Japan.

A Compilation Rerelease of the first two games for the PS3, containing both Story Modes and the second game's Dream Mode. It also adds two new characters, twelve new Dream Stages, and more cutscenes and character interaction. Dynasty characters receive an unlockable fourth costume based on their appearance from Dynasty Warriors 6, while Samurai characters receive their bonus costumes from the first two Samurai games. Those who don't appear in either (including characters cut from Dynasty Warriors 6) are accorded a new look.

Several years after the events of Warriors Orochi 2, the warriors, having finally settled on their new lives in the dimensional world, have their peace rocked again by the appearance of the Hydra, a gigantic eight-headed monster born of Orochi's power. One by one, warriors fall to both the Hydra and the resurgent Demon Army, until only three remain. When they are on the verge of defeat, Kaguya, the Moon Princess, appears and helps them escape through time travel. She reveals that she has been sent by the Mystic Realm to turn the tide against the demons, offering the heroes a chance to save their comrades through time travel while mounting a pushback against the Demon Army.

The game is the proper second title in the series (it's actually known as Musou Orochi 2 in Japan, confusing many Westerners when it was revealed). Fittingly, there are a lot of changes to the gameplay. In addition to reclassifying many characters' class types, it adds a new "Wonder" class, whose main quirk is canceling their attacks with an unlockable forward dash, as well as dealing critical hits like Technique-type characters. Other additions are the Dash Chain mechanic, as well as a bonding system, which influences the severity of the combination attack.

Doing away with the separate campaigns from previous games, this game has a unified Story Mode, divided into four chapters with traditional progression. However, side missions are once again incorporated back into the main plot. Some are alternate timeline version of the main battles, with time travel enabling you to save a character doomed in the original, while others are bonding missions unlocked by maxing out two characters' relationships. Instead of being directly accessed from the menu, Story Mode takes the players to a base camp a la Dynasty Warriors 7, where they can also converse with the NPCs and initiate weapon or stat upgrades before jumping into battle. Survival Mode has been removed in favor of Musou Battlefields, in which players can create customizable scenarios and upload them online.

The truly ridiculous amount of characters in the game, coupled with waning interest from Western markets, means that Koei never bothered to give this game an English dub, unlike its predecessors. This has the effect of making it online-exclusive in North America, because the region's law requires that a foreign-language game be given a token English dub. The tradition would be followed in later games.

A port of Warriors Orochi 3 for the PSP, released only in Japan. It adds two new characters, but removes the base camp system in favor of a traditional menu. You can plug in your PS3 save data to continue where you left off. There is a new four-player "Battle Royale Mode", modeled after Shin Sangoku Musou VS. Since the game is on the PSP, the graphics are worse off, with nonexistent Mouth Flaps and the removal of the swimming mechanic.

A port of Warriors Orochi 3 for the Wii U, the first time an Orochi game is released for a Nintendo console. In addition to the two added in Special, the game adds two more new characters for a total of 136 characters. The multiplayer exclusive, card battle minigame called Duel Mode is also introduced.

An Updated Re-release of Warriors Orochi 3, the game adds a new story campaign (Chapters 5-8) that takes place after the original game, focusing on the new threat of Tamamo, a Kitsune who has a hand in the birth of Orochi. It adds nine new characters, including Xu Shu from Dynasty Warriors 7: Empires and three more guests: Kasumi from Dead or Alive, Sterkenburg Cranach from Atelier, and Sophitia Alexandra from the Soul Series. New battle mechanics, both individual and team-based, are added, and the game also has a "reincarnation" system that allows you to reset a character level to zero, but keeps their stat bonuses. There is a new Gauntlet Mode, pitting a five-man team to survive a series of Harder Than Hard trials.

After the events of Warriors Orochi 3, the warriors are sent back to their time and place, only to be brought back again to the dimensional world by the Greek pantheon, chiefly Zeus, who seeks to combat them. As the warriors deal with them, they are once again split apart by the existence of bracelets that can transform their users into avatars of specific gods, turning the once united group into several warring factions.

The game removes the Wonder type-class, mostly integrating it with the Technique class. The new Sacred Treasures collectibles replace the Type Action mechanic of the class system with equippable items that allow characters to perform magic. A handful of characters can transform into stronger beings through "deification". The base camp has also been changed into a static menu system, although it does show the current team lineup in in-game graphics.

An Updated Re-release of Warriors Orochi 4, adding a new story campaign that details the ramifications of the previous game's story, Sacred Treasures, a deification form, and the return of reincarnation system from 3 Ultimate. It adds seven new characters, including three guests from Warriors Orochi 3, for a total of 177 characters.

Most of the tropes provided in Dynasty Warriors and Samurai Warriors also follow here. Ones that stand out are:

open/close all folders
Tropes A to D
Tropes E to L
Advertisement:
Tropes M to P
Tropes Q to Z