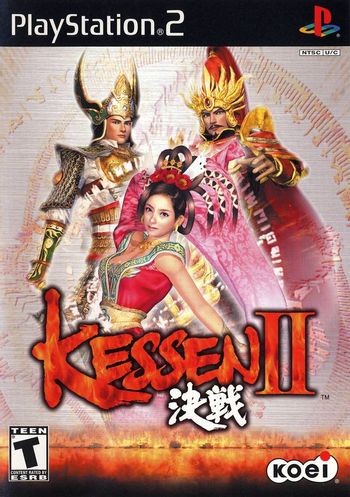 Kessen II (決戦 II, Kessen Tsu) is a 2001 strategy game produced by Koei (of Dynasty Warriors and Samurai Warriors' fame). It is the sequel to Kessen In Name Only, as both Kessen and the later sequel Kessen III are based on events in Japan, while this installment is a story loosely-based on Romance of the Three Kingdoms.

In addition to the fantasized theme, Kessen II departs from its realistic predecessor as it introduces elements of magic, especially with the portrayal of notable strategists such as Zhuge Liang and Sima Yi as sorcerers. In battle, these characters are able to cause earthquakes, summon lightning storms and hurl fireballs.

The gameplay involves playing out major battles as the storyline progresses, with cutscenes between each battle to provide development to the events and major characters. Before battle, players can choose which strategy to take, although they can manually control all units in the battlefield. All units are controlled by the AI unless the player directly intervenes, and battles between forces are carried out in real time. While in control of a unit, players are able to use special skills or magic spells to turn the tables as well as enemy characters.