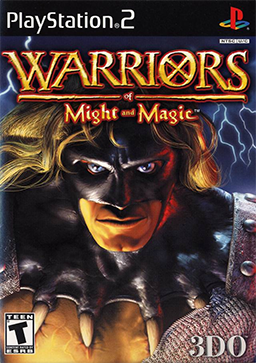 Warriors of Might And Magic is a spin off of the much more famous Heroes of Might and Magic saga, and is an Action Game.
Advertisement:

The player controls Alleron, a fomer Captain of the Guards who's accused of necromancy, forced to wear a living mask of shame and thrown in the Pit of the Accused. From here, he'll have to work his way through an army of monsters, warriors and demons in order to clear his name, find out the truth about his origins and stop the resurrection of a dark demon called Daglathor.