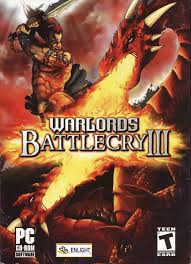 Warlords Battlecry is a trilogy of RPG/Real-Time Strategy games and the Spinoff of the well-known Warlords franchise and published by SSG/Enlight Interactive/Ubisoft. It was released on the PC in two-year intervals: the first launched in 2000, the sequel in 2002, and the final game was released in 2004.

The series' plot focused on a continuing struggle between the Civilized (Human, Dwarf, Undead), Barbarian (Orc, Barbarians, Minotaur) and Magical (Dark Elf, Wood Elf, High Elf) races, who are all vying for power. In the two sequels, several races end up forging alliances to stop the Horsemen of the Apocalypse from plunging the world into eternal darkness.

The series was created by Warlords founder Steve Fawkner, and predominately featured a mixture of real-time strategy and roleplaying elements, including a customizable hero leveling system, various factions and races to choose from, a wide variety of missions and scenarios, and various special units that players could add to their retinue. In each mission, the hero starts with a small selection of Starting Units and amasses more troops, spells and resources through upgrades, the discovery of special temples (Shrines/Mausoleums) and spellbook. Later installments of the series added more races (including Chaotic Evil factions like the Plaguelords and Dark Dwarves), the ability to travel around a world map completing story missions and bonus scenarios, a multiplayer mode, new upgrades and a Diplomacy system, which allows players to forge alliances with other factions.

The games all shared the same graphics engine and user interface. Players could craft a new hero and level up any one of several different skills and bonuses, complete campaign missions, discover new armor and weapons to augment their strength and take part in skirmish or fan-created missions outside of the main storyline. The series still maintains a loyal fanbase, and modders release new missions and storylines on a regular basis.

are available for purchase at GOG.com. The third game is also available on Steam.