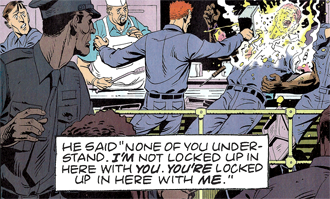 Rorschach clearing up a common misconception.
"My armour is like tenfold shields, my teeth are swords, my claws spears, the shock of my tail a thunderbolt, my wings a hurricane, and my breath death!"
— Smaug, The Hobbit
Advertisement:

Many characters like to boast about their achievements, but only a few can gasconade in style, rattling off a string of titles and battle honours that impresses allies and intimidates enemies in a way which makes them sound mythic, not conceited.

The character has got to be pretty impressive to be able to make this kind of boast convincingly, though sometimes a weaker character will bluff like this. It helps when they are obviously in a situation where they may be called on to demonstrate; if not, they may insist that they can show you at once, to prevent their appearing a Miles Gloriosus. The usual subversion is for something to promptly undercut the boaster's pretensions. The Combat Pragmatist in particular is given to unceremoniously cutting off boasters in the middle of their speech with a punch to the face. A Large Ham is particularly given to these.

Self-granted titles are considerably less impressive than those bestowed by awestruck allies, while titles of grudging respect from the character's enemies rank highest of all, all else being equal. Naturally, more powerful beings count for more, when ranking titles or battle honours.

The smarter heroes and villains may use riddling talk when describing their accomplishments.

A Badass Boast can be used in a few different ways.

This dates back to Gilgamesh, making it Older Than Dirt. note  And even the old word for it, "Rodomontade", refers to a work almost Older Than Print.

See also Pre-Asskicking One-Liner, I Have Many Names, I Am the Noun (which frequently is a component of these), Heroism Motive Speech, and "No More Holding Back" Speech. If your boast is really your oft repeated credo that explains who you are to yourself, then it is your Badass Creed. If the things you're boasting about are things that happened on-screen earlier in the story, the trope is Remember When You Blew Up a Sun?. If your boasts are lies or intention rumors, it's probably part of a Self-Made Myth. A Badass Boast often happens either during or immediately before a Moment of Awesome. May conclude with the observation that some one person has to be the one to attack them first.

Compare Blasphemous Boast, Famed In-Story, The Münchausen. Blasé Boast is when this dresses up as But for Me, It Was Tuesday. Contrast Despair Speech.

Not to be confused with Badass Boats.

Examples have been divided into their own pages!