I Am the Noun 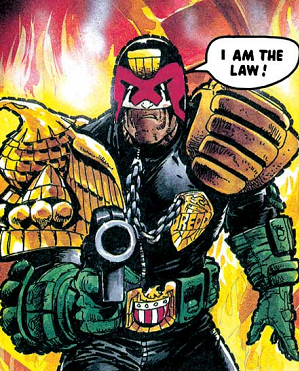 Thomas Wayne (hallucination): You are a disgrace!
Batman: No...no! You are not my father. I am not a disgrace! I am vengeance! I am the night! I am Batman!
— Batman: The Animated Series
Advertisement:

A character declares him - or herself to be the sole representative of a group or abstract concept. The implication is often that they believe that they can speak for the entirety, and that their needs, wants, and thoughts and those of the group are one and the same.

Will usually come in the form of someone asking about X, with another character replying that they are X.

Not to be confused with Screw the Rules, I Make Them!. Unrelated to I Am the Band and I Am Spartacus. See also A God Am I, Badass Boast and I'm Your Worst Nightmare. Not to be confused with Spell My Name with a "The". A phrase like this is usually spoken with copious amounts of punctuation. Said phrases might also be lyrics to an "I Am" Song.

I am the examples!:

open/close all folders
I am Advertising!
We are Anime & Manga!
We are Arts!
Advertisement:
We are Comic Books!
We are Fan Works!
We are Animated Films!
We are Live-Action Films!
I am Literature!
I am Live-Action TV!
I am Music!
Hello Vagina by Margot and the Nuclear Killers. "I am your right hand I am your best man, I am I am I am"
We are Podcasts!
I am Professional Wrestling!
We are Tabletop Games!
I am Theatre!
We are Video Games!
I am Web Animation!
We are Webcomics!
I am Web Original!
I am Western Animation!
I am Real Life!
Feedback

As Skyler fears for the safety of the family, Walter confidently tells her they aren't the ones in danger.

Alternative Title(s): I Am The Trope

As Skyler fears for the safety of the family, Walter confidently tells her they aren't the ones in danger.