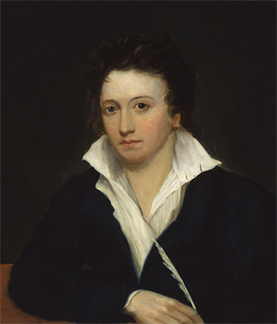 Percy Bysshe Shelley (4 August 1792 – 8 July 1822) was an English poet of the Romantic era. He is remembered largely for his lyrical works such as "Ode to the West Wind" and "To a Skylark" as well as the sonnet "Ozymandias", but he also wrote a considerable volume of political poetry and prose expressing his anger at the disparity in the distribution of wealth between the classes and the ruthless tactics used by then Prime Minister Robert Jenkinson in dealing with political dissent. In particular, his narrative poem "Queen Mab" is often cited as inspiration to later working class political movements, such as Chartism and Owenism. He was also an advocate of atheism, vegetarianism and nonviolent resistance.

He is also famous for being the husband of the author Mary Shelley, whom he met and with whom he began an affair whilst married to his first wife, Harriet Westbrook. After Westbrook committed suicide, he and Mary (then Mary Wollstonecraft) married.

He is associated with many famous figures of the Romantic era, including Lord Byron, John Keats, Thomas Love Peacock and William Godwin.

Shelley died on July 8, 1822, in a shipwreck off the Bay of Spezia, in Viareggio, Italy.