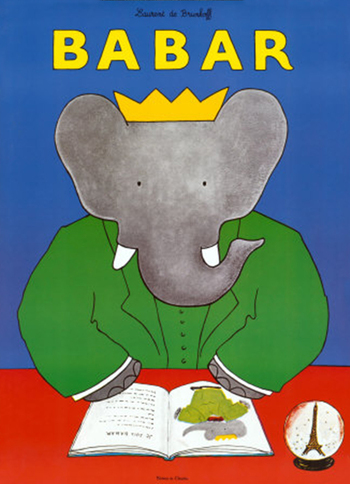 Babar is a series of popular French children's books first published in 1931, by Jean De Brunhoff, based on bedtime stories that his wife told their two children. The books feature an elephant named Babar who left the jungle as a child after his mother was killed by a hunter and came to a large city where he befriended an elderly lady known only as Madame and learned of human ways. After returning to the jungle, Babar shared what he learned with his fellow elephants, prompting them to construct a city they name Celesteville and to crown Babar as king of the elephants.

Also featured in Babar's stories are his wife Celeste (whom the city was named after); his brother-in-law Arthur; his four children Pom, Flora, Alexander, and Isabelle; his elderly advisor and prime minister Cornelius; and a monkey named Zephir who is a friend of Babar's family. There is also a neighboring kingdom of rhinoceroses ruled by the tyrannical Rataxes that shows up from time to time as the rivals of Babar and his subjects.

The books are seen by some as an allegory of French colonialism, with Babar as a young native who goes to France for education and comes back to teach the ways of civilization (defined as "the way the French do things") to his fellow countrymen. Jean de Brunhoff originally created 7 Babar books between 1931 and his death in 1948; his son Laurent de Brunhoff succeeded him as author and continues to write new Babar stories to this day.

Countless record versions and stage production were released quickly after the premiere of the first book, but Babar's animated debut wasn't until 1968, with the TV special, The Story of Babar: The Little Elephant, an adaptation of its namesake book (which was the first book) as well as the second and third books, The Travels of Babar and Babar the King, which was followed by an adaptation of Babar Goes to Hollywood released in 1971. Both specials were directed by Bill Meléndez of the Peanuts specials fame and narrated by Peter Ustinov. The next TV special of Babar came out fifteen years later, with Babar and Father Christmas in 1986, a 25-minute Christmas Episode by the Canadian animation studio Atkinson Film-Arts.

A few years later, an Animated Series was produced by the world-renowned Canadian animation studio Nelvananote who have since assumed distribution rights to the non-Nelvana Christmas special, likely as a result of the bankruptcy that befell Atkinson Film-Arts. It originally aired between 1989 and 1991 and then in 2000, airing on the CBC and then Global in Canada, and on HBO (which also aired the Christmas special annually) and later Qubo in the US (with the 2000 revival being shown on Teletoon in Canada and CBS in the US). The series ran for 6 seasons of 78 episodes and was broadcast in 30 languages in over 150 countries, making it one of the most widely distributed animated shows up to that point. The first 2 seasons mainly followed Babar's childhood and early years as king (told through his own recollections), while the remaining 4 seasons shift to his life in the present. A number of new characters were introduced in this series too, such as Babar’s uppity second advisor Pompadour. The characters' voices were provided by many familiar Canadian actors, most notably Gordon Pinsent as Babar himself. Praised for its ability to tackle serious issues with drama and nuance and treat its preschool audience with respect and maturity, the show is widely considered to be one of Nelvana's greatest series and a true icon of Canadian animation. Episodes can be seen on Youtube on the show's official channel

There have also been two movies. The first was Babar: The Movie released in 1989, which was The Movie for the Nelvana TV series, but with some noticeable Continuity Snarls and drastic personality changes for some characters. The second was Babar: King of the Elephants released in 1999, which was an entirely new adaptation of the original books, completely ignoring the animated series (although still produced by Nelvana and with a few of the actors from the 1989 series reprising their roles, plus Alexander's actor voicing Arthur). Sadly, both films came and went at the box office with little fanfare.

A Lighter and Softer All-CGI Cartoon sequel to the 80s Nelvana Animated Series called Babar and the Adventures of Badou (also produced by Nelvana) began airing on YTV in Canada and Disney Junior in the United States from 2010 to 2015, running for 3 seasons of 65 episodes. It focused on Babar's grandson Badou, and introduces a large number of new characters to the Babar universe while also having several voice actors from the original show reprise their roles.

Tropes featured in the original books include:

Tropes featured in the Babar animated series include:

Tropes featured in The Movie include:

Tropes featured in Babar: King of the Elephants include: