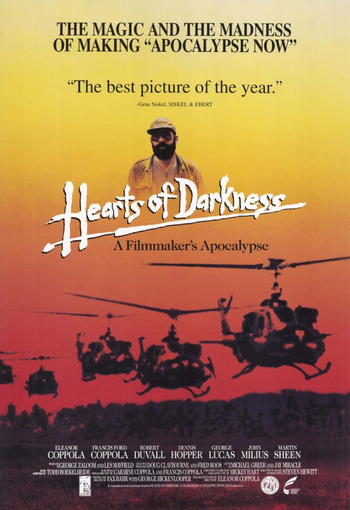 "The way we made [the film] was very much like the way the Americans were in Vietnam. We were in the jungle, there were too many of us, we had access to too much money, too much equipment, and little by little we went insane. After a while, I was a little frightened, because I was getting deeper in debt and no longer recognized the movie I was making. The film was making itself, or the jungle was making it for me."
— Francis Ford Coppola
Advertisement:

Hearts of Darkness: A Filmmaker's Apocalypse is a 1991 documentary chronicling the Troubled Production of Francis Ford Coppola's Apocalypse Now, and how it not only nearly destroyed the career of the director, but also threatened both the mental and physical health and even lives of not only himself, but also members of the cast and the crew.

The film was put together from various behind-the-scenes footage and interviews by Fax Bahr and George Hickenlooper, along with Coppola's wife, Eleanor Coppola, who also provided the narration. As renowned as Apocalypse Now is, this documentary is often considered its equal.