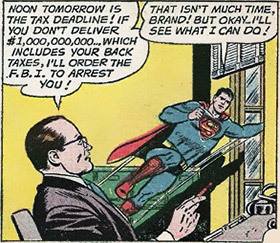 Superman may be a dick sometimes, but even he pales before the Taxman.note Collateral property damage from saving the world doesn't come cheap, ya know.
"I'm crazy enough to take on Batman, but the IRS? Nooo, thank you!"
— The Joker, The New Batman Adventures, "Joker's Millions

Even daredevil superheroes and hardened villains fear the taxman from the IRS.

This is especially odd when said characters handle Eldritch Abominations on a regular basis and are able to kill an army like it was nothing. Apparently, going to jail for tax evasion is a Fate Worse than Death. On the plus side, they help the reader relate to the character (because taxes are Serious Business in Real Life) and can even make the villain more sympathetic, pitting them against the unfathomable might of... taxes. Even gangsters who get away daily with murder and robbery may fall into the clutches of the law, dead or alive, if they don't pay their income tax. (In fact, that actually happened to Al Capone.)

Sometimes, the intimidating part comes from a person who gets a summons to the tax office and the person fears that they are in trouble and might be arrested for a tax violation. In this kind of story, it turns out the bureaucrat is a nice enough person who just wanted to clear up a minor problem and, seeing that the character is frightened, has to give some reassurances that nothing is wrong beyond that.

The trope is named after the USA's Internal Revenue Service, a department of the USA's central/federal government which collects all the country's taxes except for those on goods imported from other countries (tariffs) and ships entering US ports (tolls). Based on His Majesty's Inland Revenue department (now Her Majesty's Revenue and Customs), it was founded shortly after the beginning of the USA's Civil War as part of the process of full economic mobilisation required to build up and sustain an army big enough to suppress the rebellion.

Most every country has its own version of this, often depicted the same way. They count as well.

For the lighter, comedic version, see Department of Major Vexation. See also Forensic Accounting, a common tool used by the Intimidating Revenue Service. Audit Threat is when the characters threaten to call the Intimidating Revenue Service or their friend who works there. Taxman Takes the Winnings is when you win a big sum of money only for the IRS to take its very large chunk - no intimidation is necessary there.

Having to pay your taxes is comically considered one of The Three Certainties in Life, along with death and whatever third thing you want to add for the Punch Line.

The story was based on a Golden Age Batman story (and is almost an exact adaptation).

Black Dynamite has not payed income taxes in 8 years and now they're out for blood.

Black Dynamite has not payed income taxes in 8 years and now they're out for blood.