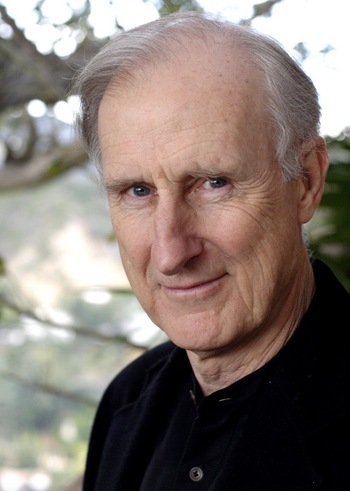 That'll do, pig.
"...James Cromwell is the Voltron of That Guys-that he's actually an 80-foot tall physical combination of the other 19 men on this list; a massive, indestructible character actor endowed with the specific talents of all other That Guys...A guy who, in all seriousness, has never not been in a movie."
— Cracked, "The 20 Best 'That Guys' Of All Time

The 6'7" Cromwell has the distinction of being the tallest actor to get nominated for an Academy Award, earning a Best Supporting Actor nomination for his role in Babe (he is also one of the few actors who has appeared in Star Trek who is taller than the 6'4" Jonathan Frakes and equally-tall Michael Dorn). He's also been nominated for four Emmy Awards and four Screen Actors Guild Awards during his career. He won the 2013 Canadian Screen Award for Best Actor for his role in Still Mine and the 2013 Primetime Emmy Award for Outstanding Supporting Actor in a Miniseries or a Movie for his role in American Horror Story: Asylum.

Cromwell's Hollywood roots run deep. His father, John Cromwell, was a prominent actor and director during The Golden Age of Hollywood, whose career was cut short after getting blacklisted in the early '50s; his mother, Kay Johnson, was an actress in the same era.

His roles have included: