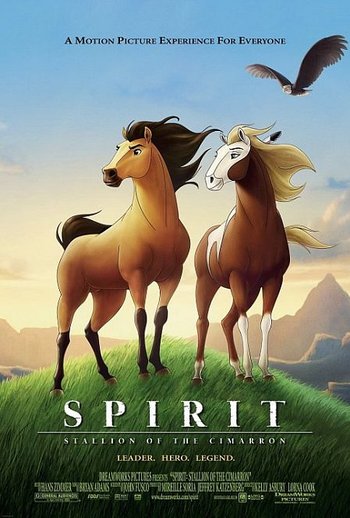 "They say the history of the West was written from the saddle of a horse, but it's never been told from the heart of one... not 'till now."
Advertisement:

Spirit: Stallion of the Cimarron is a 2002 film by DreamWorks Animation; one of their last traditionally animated features before they made the switch to CGI full-time.

The film is about a feral horse (voiced in his narrations by Matt Damon) who is born on the American prairie and has encounters — both positive and negative — with the humans who also live there. Spirit is captured and taken away from his herd by American soldiers, resisting their attempts to tame him. At the camp he befriends a Lakota man named Little Creek, though their relationship is far from affectionate. Together they escape from the soldiers' camp, but the spread of the white man continues to plague them throughout the story.

Besides the main story of a horse returning to his herd, the film is really about the domestication of the American wilderness. The Colonel, the main antagonist of the film, represents Western civilization invading the North American landscape and changing the land to suit its needs. Although Spirit ostensibly gets a happy ending, history really makes it a foregone conclusion...

Compare Disney's Dinosaur, which was originally going to have the same format — a narrator, and lots of music, but no talking animals.

An animated series, Spirit: Riding Free, premiered on Netflix in May 2017, starring a descendant of Spirit making friends with a city girl new to the country. Spirit Untamed, a CGI film adaptation of the first few episodes of said show, was released theatrically in June 2021.

Spirit: Stallion of the Cimarron provides examples of the following tropes: