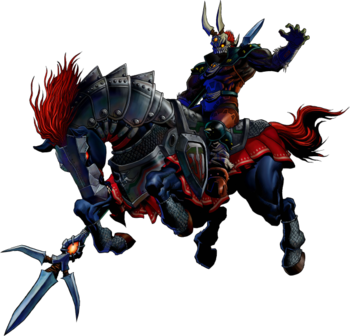 Anything is possible when you're Phantom Ganon.
I am on a horse.
"I should probably clarify, that diamond horse I've been telling you about? It's not a sculpture or anything! It's a living horse that actually happens to be made of — actually, I'll just go get her. Butt Stallion! Come here girl! Say hello, Butt Stallion!"
— Handsome Jack, Borderlands 2
Advertisement:

So, you have yourself a badass, who now needs a badass way to get from point A to point B. Naturally, the Cool Car and the Cool Bike are there for him! The problem? We are in a High Fantasy story, mate and we've got no stomach for that much Anachronism Stew.

An easy way to tell a Cool Horse is to check if it has a name. Especially, if it has a badass name. More especially, if it can run through the entire story without having to rest and eat. Most especially, if it looks badass — a Hellish Horse is cool by definition, as well as if it's involved in Horseback Heroism. Bonus points if, for whatever reason, the hero is the only person who can ride it.

A race who are Born in the Saddle will have plenty of these, though the chief probably has the pick of the coolest ones.

Many Cool Horses can be used in battle without any serious training — which is very much not true in Real Life. Indeed Give Me a Sword often asks for a horse. However, even a Cool Horse is sometimes not above a little Horsing Around for comic relief when he is feeling ornery. May or may not be a Cool Pet, depending on usage.

On alien planets, a Cool Horse will usually have a different color... and may also be a machine. Or even talk. See Power Up Mount for video game examples. Compare My Horse Is a Motorbike, when a modern-day vehicle (most commonly a motorcycle) is given Cool Horse traits.

Contrast The Alleged Steed. (though an Alleged Steed can be a Cool Horse in disguise if Took a Level in Badass). Can go with Diligent Draft Animal when horses are used for manual labor.

open/close all folders
Anime & Manga
Ballads
Comic Books
Fairy Tales
Fan Works
Films — Animation
Films — Live-Action
Literature
Live-Action TV
Music
In the album "Under the Grey Banner", from Dragonland, at the end of the song "At the Inn of Eamon Bayle" we're introduced to a mare black as the night and swift as the wind, that in the next song ("The Black Mare") will carry both the protagonist and his elf companion to the Elven lands.
Myths & Religion
Pinballs
Radio
Tabletop Games
Toys
Video Games
Visual Novels
Web Animation
Webcomics
Web Original
Western Animation
Real Life
Look at my horse, my horse is amazing!
Feedback