Land in the Saddle 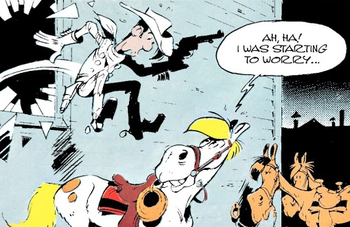 A popular exit for the swashbuckling or Western hero: leap down off the roof, wall or balcony you're on — or out of a window — and land in the saddle of your waiting Cool Horse as onlookers wince in sympathy.
Advertisement:

An adventurer in a modern setting might attempt the same trick with a car. If he's really planning ahead, it will be a car without a roof.

A subtrope of No Escape but Down. Not to be confused with Falling into the Cockpit or Born in the Saddle.

Definitely not Truth in Television. Doing this in real life will either cause you or the horse serious injury, and doing it from high enough can kill the horse outright by breaking its back and collapsing its lungs.