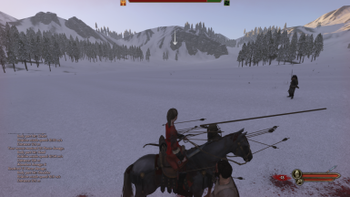 "Wait there! I need to fetch more arrows!
Willow: Don't hit the horsies!
Buffy: We won't! (whispering to Giles) Aim for the horsies.
— Buffy the Vampire Slayer, "Spiral"
Advertisement:

In any combat situation with people riding horses on one side, and ranged weapons on the other, some of the bullets (arrows, etc.) are going to hit the horses. After all, real bullets don't have anyone's name on them, they're addressed "to whom it may concern", and a horse makes a mighty big target. It's pretty inevitable that some of those horses are going to get hit and fall down, probably further injuring themselves.

The problem is this is very hard to fake in live-action film and TV barring CGI or similar advanced effects. Training a horse to fall down on cue is hard and training a horse to fall down at a gallop is nigh-impossible. During the 1920s and 1930s, movies often did horse fall stunts with tripwires, with fatal results for many of the horses. Actually shooting a horse is, of course, cruel, expensive, wasteful, dangerous for the rider, and probably illegal, but is sometimes done where the law doesn't prohibit it.

Come to think of it, the "expensive" and "wasteful" parts make this a Justified Trope in some situations; trained horses have a pretty good resale value if you manage to kill the rider instead.

The result is that you can watch dozens of Westerns and never see a horse get shot, no matter how many riders are shot off of them. Because people tend to be sensitive to cruelty against horses, this trope also appears in non-live-action fiction.

In many RPGs video games, your horses are of no interest to enemies and often aren't even seen as creatures in the gameplay mechanics.

See also Automaton Horses, where horses are invulnerable to a lack of non-combat care (that would do a lot of harm a real horse). As this trope is very common, the examples on this page favor aversions.