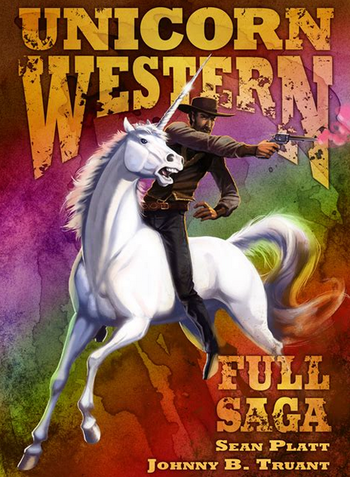 Unicorn Western is a "reinvention of both the western genre and unicorn lore" created as a collaboration between Sean Platt and Johnny B. Truant, as a dare by Sean's usual writing partner, David Wright. Who says you can't do a western without doing a lot of research, especially if it has unicorns?
Advertisement:

Marshal Clint Gulliver and his unicorn companion Edward had found peace in the small town Solace. On Clint's wedding day, before he could get "hitched" with his bride-to-be Mai, a threat is predicted to be heading toward town for revenge: the outlaw Hassle Stone. Dark magic follows.

As of this edit, Unicorn Western consists of four separate instalments. The first was published Dec 20, 2012.