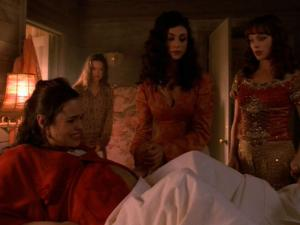 The episode opens outside the Heart of Gold bordello, a solar foil-covered building in the middle of barren desert. A hovercraft and party of horses ride up to the bordello, led by Rance Burgess. Burgess is a local rancher, the richest man on the planet, who likes to play kingpin with his wealth rather than use it to improve the community. While Nandi, the madame of the house, tries to kick him out, he instead forcefully takes DNA from the unborn child of Petaline (one of the prostitutes) in the hopes of proving that the baby is his. As Burgess and his men leave, the women agree that they need to try and find someone to get rid of him.

Aboard Serenity, Malcolm is cleaning and playing with his guns at the kitchen table when Inara surprises him. As she questions the wisdom of taking over the whole table for his armory, Wash arrives and tells Mal that a distress call came in—for Inara. Aboard her shuttle, she takes the call from Nandi and it's revealed that the madame of the bordello is a former Companion who was a friend of Inara's years ago; upon leaving the order, Inara was meant to shun her. After Inara hangs up, Mal comes out from where he was obviously eavesdropping and agrees immediately to help the Heart of Gold out with no payment necessary (though Inara still insists on making sure he's paid). Jayne immediately agrees to the job upon finding out that they're helping a whorehouse.

At the Heart of Gold, the group divides up to interact with the women: Jayne grabs one to bed, Book gives religious services, and Simon goes to examine Petaline. Mal, Inara, and Nandi discuss Rance Burgess and the way he controls the planet; Mal decides that he wants to meet Rance and talk to him before fighting him, and he convinces Inara to pose as his lady as they go to the theater Burgess is attending. As they pose as a wealthy couple, Burgess and Mal size each other up during conversation and Burgess shows off his customized laser pistol. After leaving, Burgess takes a call and discovers to his excitement that Petaline's child is indeed his.

At the Heart of Gold, Mal describes his plan: leave. He realizes that Burgess is too zealous to be scared off or reasoned with (calling him "a monster who thinks he's right with God"), and too powerful to easily fight. He would much rather pack up all of the members of the Heart of Gold and transport them to a safer planet. Nandi refuses to abandon the land, as she spent years building her business and is willing to die to protect it. Unable to convince her otherwise, Mal agrees to get the crew to train the hookers and prepare for a siege.

The crew of Serenity begins their preparations: Book builds fortifications, Zoe and Wash construct traps in the desert sand, Jayne prepares the weapons, and both Jayne and Zoe teach the whores how to shoot. Petaline goes into labor, forcing Simon to care for her despite having never been the primary deliverer before. While Mal admires Nandi's engraved handguns, they discuss why she left Sihnon and the Companions. As they drink, Mal eventually goes in to kiss Nandi and it evolves until they have sex. Back in town, Burgess gathers up a mob; he's received information from Chari, a turncoat Heart of Gold girl, whom he forces to service him in front of the men.

As dawn comes, Mal leaves Nandi's room while still half-dressed and bumps into Inara in the hallway. While she doesn't betray her emotions to Mal, she later collapses and sobs in the corner alone.

The whole group gets into their defensive positions and waits for the attack, and Nandi speaks to Inara and realizes that she was in love with Mal and is feeling betrayed. While she tries to confront Mal about Inara, Burgess appears on the horizon in his hovercraft (now with a mounted machine gun), with a group of horsemen. The attack begins, with both sides exchanging heavy fire and taking casualties. Wash and Kaylee return to Serenity, planning to fly low over Burgess's mob to burn them with the engines, but several of the townsmen have already boarded the ship, and they find themselves in a gun battle. Burgess sets part of the building on fire with his laser, but Book uses a water cannon to put it out and later as a weapon against the horsemen.

Burgess uses the confusion to dismount his hovercraft, with Chari leading him into the building. Just as Petaline gives birth, Burgess bursts into the room and takes the baby boy. While Inara takes Burgess captive with a knife and forces him to hand the infant over, he frees himself and kills Nandi before fleeing. While Burgess attempts to escape on his hovercraft, Mal steals a horse and gives pursuit. Burgess runs out of power for his laser, giving Mal an opportunity to knock him off the hovercraft. They tussle briefly before Mal gets Burgess at gunpoint; Mal is sorely tempted to kill Burgess when he insults Nandi, but Pistol Whips him instead.

Back at the Heart of Gold, the survivors of the mob (including the ones Wash and Kaylee trapped aboard Serenity) have been tied up, and Burgess is dropped with them. Petaline comes out of the building holding her baby (which she's named Jonah), and coldly shoots Burgess in the head with Nandi's favorite pistol before sending Chari and the captured townsmen back to the town. The girls give a funeral for their dead, and Serenity takes off.

Aboard the ship, Mal and Inara meet in the cargo bay. Mal appears ready to talk to Inara seriously about their relationship, only for her to reveal that she's leaving Serenity and walk away.