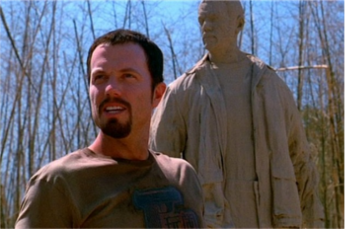 "This must be what going mad feels like."
— Simon
Advertisement:

The crew arrives in Canton, a moon dedicated to the production of high-strength ceramic mud. An offworld buyer has enlisted Mal to pick up some goods from a local contact, so he assembles a landing party consisting of himself, Jayne, Kaylee, and Wash. Kaylee pressures him into bringing Simon along so that they can spend more time together. While exploring the mud fields, however, the crew encounters a surreal sight: a larger-than-life statue of Jayne.

As it turns out, Jayne did a job in Canton stealing a large sum of money from the magistrate, but was hit by anti-air emplacements and forced to jettison the cash in order to stay airborne. It landed on the "mudders" (local peasants who harvested the mud and made up most of the population), and since that day he had been a folk legend, "the Hero of Canton."

Though Jayne tries to lie low, he is soon recognized, celebrated, and plied with alcohol.

Inara meets her client, the magistrate's son, who is 26 and still a virgin. He is embarrassed, but Inara puts him at ease, explaining that virginity is merely a state of being; despite what his father says, it is not his sexual experience, but his actions that make him a man. In the meantime, River begins to "edit" Book's Bible, citing its inconsistencies with evolution and cosmology. Book attempts to explain the importance of faith in things that cannot be proven empirically.

Mal returns to Serenity with Wash, while Kaylee opts to remain in the bar with Simon, as they are drunk and beginning to bond. Mal decides to use an impromptu "Jayne's Day" celebration to distract the local officials so the crew can track down the cargo. That night, the magistrate releases Stitch, Jayne's former partner in crime, and informs him that Jayne is back in town.

The next morning, Mal returns to find Kaylee on top of Simon. Simon hastily denies that anything happened between them, and she leaves, offended. The celebration begins in front of Jayne's statue, and the Hero of Canton gives a brief speech. Stitch takes Simon hostage and indignantly barges in on the festivities. He explains that Jayne only dropped the money because the ship was damaged, and he kicked out Stitch first. He shoots at Jayne, but a mudder leaps in the line of fire and is killed. Jayne kills Stitch, and is overcome with disbelief that anyone would take a bullet for him after learning that he betrayed his partner and only helped them accidentally. He says they shouldn't expect people to simply drop money on them, because there aren't people like that...there's just people like him. Guilt-ridden and disgusted, he pushes over the statue and leaves.

Wash finds that Serenity has been land-locked by the authorities. The magistrate's son, however, lifts the lock as an act of defiance, showing to his father that he is a man now. Kaylee asks Simon why he acts so "proper" when they are far from the polite societies where such things are expected. He says that his manners are all that he has left, and his politeness is how he shows his respect for her. Before letting him off the hook for his earlier behavior, however, she taunts him by implying they slept together the previous night.

Serenity lifts off, and Jayne and Mal share a pensive moment in the cargo hold. Jayne cannot understand the mudders' loyalty to him, whereas Mal doubts that any hero has ever been as pure and selfless as their legend implied.