A Tankard of Moose Urine 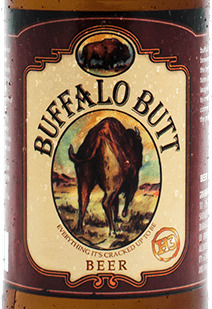 And this is what they serve

when they run out of moose urine too.note Funnily enough, Buffalo Butt is a microbrew. It's actually delicious.
"Excuse me, I think ye gave me the wrong mug. I ordered a beer, an' this seems ta be a tankard o' moose urine."
— Durkon Thundershield, The Order of the Stick: On the Origin of PCs
Advertisement:

There are generally two kinds of bars in fictionland: those where they serve beer that is the nectar of the gods, and those where the product going into the user's mouth tastes about the same as the stuff that gets peed out later that night. This trope is the latter. Often the mark of a Bad-Guy Bar.

Do not expect this to keep the patrons from swilling the stuff anyway, or from handing you your hindquarters if you ever discuss this trope in the bar. They may even have grown so accustomed to the taste that they think it's good beer.

Often described in terms that make you wonder what exactly the drinker has been putting in their mouths. Not to be confused with drinking actual urine, moose or otherwise. Compare and contrast Gargle Blaster, where a drink is rendered undrinkable by the alcohol content rather than taste.

Terrible alcoholic drinks go in this trope. Bad coffee and other non-alcoholic drinks are covered in Bad to the Last Drop. When bad, cheap wine or liquor is passed off as fancy and expensive, that's an Expensive Glass of Crap.