Charlie and the Chocolate Parody 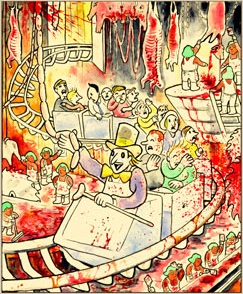 Come with me...
and you'll be...
in a world of
total imitation... note This picture represents the ending of the short story "Pig" by Willy Wonka's creator Roald Dahl..
Advertisement:

Since the late 1990s it's been almost mandatory that an animated show that stays on air long enough will have a Charlie and the Chocolate Factory parody episode. Such parodies usually explicitly mimic the 1971 adaptation Willy Wonka & the Chocolate Factory, owing to its memorable and easily repurposed musical numbers and the idiosyncracies of Gene Wilder's Willy Wonka. Beyond out-and-out retellings of the storyline, spoofs of specific scenes and other shorter-form parodies are popular in all media.

They usually include at least one, if not all, of the following plot points:

Also happens in Fan Fic; some varieties of Transplanted Character Fic are this.