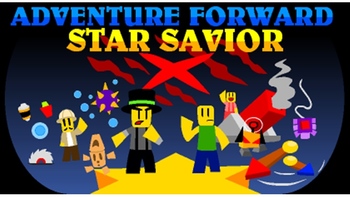 "Leap into a giant world full of adventure and danger! A shadowy Robloxian known as Stratosfear has smashed all of the stars out of the sky, and proceeded to lock up several areas in Maytown so that nobody can reach any of the stars. The citizens of Maytown need a hero who can banish Stratosfear once and for all. Rise up and become the Star Savior!"
—The game's description
Advertisement:

Inspired by games such as Super Mario 64 and Super Mario Sunshine, Adventure Forward: Star Savior is a Platform Game on ROBLOX created by explode1. As in the aforementioned games, players advance through levels by collecting stars that unlock new worlds. There are seven different worlds, plus various secret worlds scattered around Maytown. They are as follows:

At the end of Shadows in the Sky, the player gets to fight Stratosfear in a three-phase battle, followed by an escape sequence as the platforms begin to fall. There also exists a secret that can only be uncovered when the player collects 51 Stars.

A sequel has been made to the game and its story, Adventure Forward 2: Points Of Conflict.

, but remains unplayable due to the original developer getting banned following allegations of sexually predatory behavior against minors during a game shutdown for maintenance before its completion and reactivation.However, several years later in January 2021, a restored version

under the name Adventure Forward: Star Savior Deluxe has been created by SirRovers, adding in a post-game continuing from where the player left off after Stratosfear's defeat and the original game's true ending.