Bribing Your Way to Victory 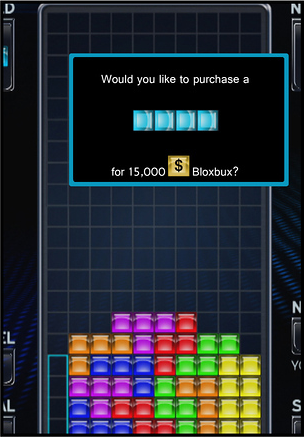 Anyone for a game of Tetris Blitz?
"Never. Sell. Power. This is seriously micro-trans 101, but we still seem to have this temptation to squeeze the maximum amount of money out of our players by selling them things that alter the balance of gameplay."
— Daniel Floyd, Extra Credits
Advertisement:

Don't feel like doing a quest to get the reward? Don't care about taking time to unlock the game's super ultra secrets? Or perhaps you just suck?

Rejoice, gamers, for now we can have Truth in Television Video Game FUs, where only the rich kids will have all the cool stuff.

This trope has its origins in Arcade Games, in the form of the "continue" feature. If you run out of lives or health, the game will offer to let you replenish your lives/health by putting some money in the machine; often, you can keep doing this so long as you have the cash to keep going. In other words, you don't necessarily need a lot of skill to reach the end of the game, just a very deep wallet.note That said, in more competitive circles, many players will try to beat the game without using a continue in a show of extraordinary skill, a feat called a 1CC or 1-credit clear.

Some online games do such a thing as a response to Real Money Trade, on the logic that players would do it anyway. The sister trope is the Allegedly Free Game, which advertises itself as "free to play" but requires purchases to unlock content, up to and including higher levels and/or the actual ending. To clarify, the difference between these tropes is that Real Money Trade is forbidden by the game's developers, while an Allegedly Free Game cannot be played in its entirety without paying money, and Bribing Your Way To Victory allows you to buy better stuff but doesn't lock you out of content.

A common variant of this trope is to put in countless hours of incredibly dull Forced Level-Grinding with minimal content at the lower levels, then allow players to skip it by buying Experience Points and/or whatever currency they would otherwise need to grind out to progress. This essentially results in an Allegedly Free Game with the illusion of being able to Earn Your Fun, even though the latter is rendered useless since you rarely save more than a dollar per hour of grind compared to just coughing up the money - mowing the neighbor's lawn would be less work, more fun, and still pay more. In cases like this, and other situations where you can buy quicker access to stuff you can get in the game, it seems like the developers think their game is boring enough, at least at the early stages, that people will pay money to play less of it.

This is very difficult to implement in a way that doesn't hurt the experience for players unwilling to spend the extra money.

A Real Life subset of Screw the Rules, I Have Money!.

Not related to Crimefighting with Cash.