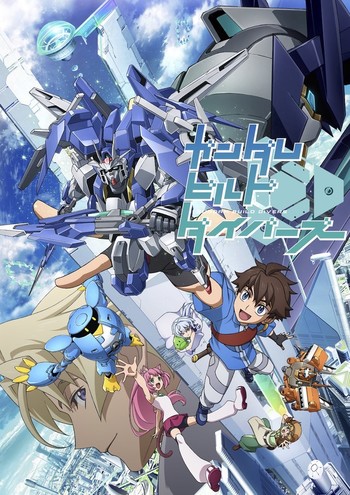 In the near future, Gundam plastic models (Gunpla) have become more popular than ever through the release of a Virtual Reality game called Gundam Battle Nexus (GBN), where users can "dive" into a Massively Multiplayer Online Role-Playing Game world and pilot their Humongous Mecha first-hand. Middle school students Riku Mikami, Yukio Hikada, and Momoka Yashiro are three such "divers" who dream of becoming champions in the game's yearly Player Versus Player 5 vs 5 squad tournament, despite their lack of skills, experience, or even a full team. Their luck begins to turn around, however, when they meet a mysterious girl named "Sarah", whose uncanny ability to judge people through their Gunpla starts to give them just the edge they need.

Has an October 2019 sequel as part of the "Mobile Suit Gundam: Beyond 40th" Milestone Celebration, Gundam Build Divers Re:RISE.