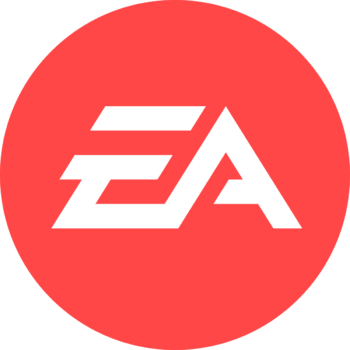 Electronic Arts (EA) is the second-oldest independent video game publisher to remain in existence (since the demise of Acclaim). Beginning life in 1982 as the brainchild of electronics entrepreneur and corporate raider Trip Hawkins, the company first made its name publishing titles for the home computer market on machines like the Commodore 64 and Apple ][ rather than attempting to follow Activision into the home console market. As a result of this, they largely avoided becoming embroiled in The Great Video Game Crash of 1983 which killed off many of their rivals. In their early days, they justified their name by attempting to treat computer games as art, and the authors as artists in their own right, sending them to network television interviews and nationwide press junkets. They also did various non-videogame projects during the era, including the animation in the title sequence of the British Game Show Catchphrase for its' first few years. They also compared game designers to "rock stars," to the point where they issued early games in LP-style sleeves, complete with gatefolds.

The modern company is divided into two main domains: EA Sports (the big money-maker and where most of their revenue comes from) and the more-controversial EA Games. The company's first big break in the modern era was the Sega Genesis release of Madden NFL, one of the first football games to represent the game to a reasonably accurate degree (True to their tagline, If it's in the [real] game, it's in the [video] game) and was also fun to play. Their sports games would eventually expand to become their most profitable line after signing licenses with the NHL, NBA, PGA, FIFA and others, and a new title for each sporting organization comes out every year like clockwork.

A lesser-known, third division of the company is called EA Partners, which handles publishing duties in the West for many games developed by Japanese publishers who lack a presence outside Japan, as well as offering publishing and distributing channels for smaller Western developers that wouldn't normally have access to those channels by themselves. The most prominent of those was a short-lived partnership with Squaresoft in the days before their merging with Enix. Today, EA Partners is the publisher of a number of titles from smaller developers, including the Rock Band series, the Crysis series, the Shank games and, surprisingly, being the retail distributor of games developed by Valve before the company seemingly abandoned console gaming altogether.

EA is also notable for the sheer amount of controversies and boycotts over the years from their questionable business practices, which resulted in them "winning" Consumer Media LLC'snote the same guys who publish Consumer Report "worst company of America award" for 2012 and 2013.

On May 6, 2013, about a month after LucasArts' closing, it was announced that EA Games and its subsidiaries, DICE, Visceral Games, and BioWare (which previously worked on both Star Wars: Knights of the Old Republic, and Star Wars: The Old Republic) will be taking over duties for creating Star Wars video games.

Despite this, EA has proven extremely successful over the past few years, outdoing their profit projections for the eighteenth consecutive quarter in Q4 FY 2019.

Although the company launched their own service, Origin, in 2011, to compete with Steam and gradually began to stop releasing games on Steam (with Warp being the last game they would release on Steam), on October 29, 2019, they reversed this policy, announcing that they would be bringing several of their titles released over the course of the previous year (as well as the Star Wars Jedi: Fallen Order) to Steam (though you still have to have an Origin account).

On a funny note, their record label used for their games' music (EA™ Recordings) used to be abbreviated as E.A.R.S., now named Electronic Arts Music after 2016.