Visual Novel / Cause of Death 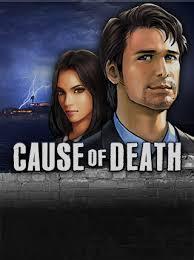 Cause of Death is a Visual Novel style serial published by Electronic Arts for the iOS operating system beginning in December 2010. Falling under the Detective Drama genre, it follows a Homicide police contingent in San Francisco, focusing on decorated (albeit with some qualms about following authority all the time, courtesy his daddy issues) detective Mal Fallon and FBI profiler Natara Williams. And yes, the profiler is very much justified, given the problems San Francisco is having on account of the Connoisseur, a more-than-slightly-well-heeled funder of...Serial Killers. The focus isn't just on the killers and their impending comeuppance, though, but also on the personal relationships (platonic and otherwise) of the Homicide department.

Cause of Death is downloaded with its first volume (or, to use the current terminology, "season") completely free. After release, each week sees a new episode accessible for free...for that week, anyway. In order to play through episodes that aired before that, purchase is required. Thankfully, there's a discount for older seasons, increasing with age. The initial season has six episodes, with a bonus scene after it all if the player does well enough throughout. After that, each season has eight episodes, and rather than one bonus scene for the whole lot, there's one bonus scene for each episode. Between episodes, a two-part "Side Story" is published that focuses on someone besides Mal and Natara. And finally, there are the occasional Short Story Collection premia that don't actually have choice sections; just click and watch the show... er... read the story.

Unfortunately, after a few months of failing to meet the weekly episode standard, the game began to release content biweekly in September 2013.

After months of server issues and episodes being pushed back from their scheduled release dates, the introduction to Volume 16, Chapter 4 (released on June 5th 2014) announced that Cause of Death was soon coming to an end. The team thanked the fans and promised the "final episodes" would be released soon. And in July 2014, the series released it's finale (the final chapter of it's 16th volume); in September 2014, the game was delisted from the App Store.

The only way for new users to get the game is through unofficial rereleases, such as this one

documenting the game by uploading a categorized playthrough of it.

While the game has been delisted, its creators went on to create Choices: Stories You Play, an Android/iOS game that offers a variety of separate stories. One of those stories that is perhaps the closest to Cause of Death is Most Wanted; the two have a few similarities. For one, San Trobida, a fictional location appearing in the 11th volume of Cause of Death, is mentioned early on in Most Wanted, as well as a Shout-Out to "Rise of a Maskmaker," an in-universe movie in Cause of Death based on the events of volume one. Other stories in Choices: Stories You Play mention Mansingh Transglobal, the company which Natara's father owns. Additionally, both of the series stare a male Detective in his home city, who is complemented by a federal agent visiting it. Apart from being contemporary murder mysteries, that's pretty much where where the similarities end.

This serial provides examples of: