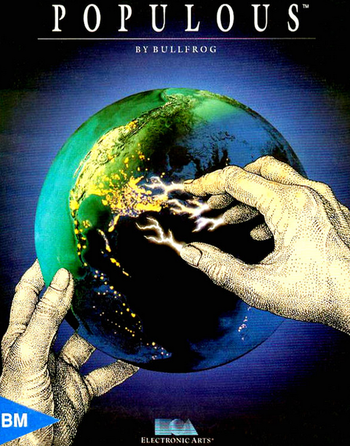 "Populous is, in many ways, SimCity with just a bulldozer."
—Dr. El Sandifer

Populous is a God Sim; scratch that, Populous is the God Sim. Designed in 1989 by Bullfrog Productions (developers who also brought us Theme Park, Theme Hospital and Dungeon Keeper) under the leadership of a young Peter Molyneux (who later brought us Black & White and Fable). It saw the player taking the role of a deity that helped a primitive tribe of people grow strong enough to fight a powerful enemy to defeat rival gods.

There are currently four main games, plus a few expansions :

Bullfrog was taken over by EA in 2007, in the era where EA had made a reputation for the Borg-like assimilation of studios they bought out, so it's highly unlikely another sequel will be made.

This game series contains examples of the following tropes :