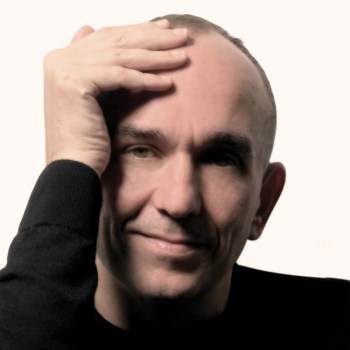 "I just love what I do, and when you get someone who loves what they do so much, you get them to talk about what they're doing, of course I'm gonna come across as enthusiastic."
"Does Peter Molyneux have kids? That's a frightening thought. You can bet he really talked them up before coming out of the womb. 'This one's basically gonna be the greatest child in the world. The innovation going in this child, you just can't believe it! This child—get this—this child will eat things, and the matter it eats will be converted into matter that processes the body! It's never been seen before!'"
—Ben Croshaw on

your friend and mine, Peter Molyneux
Advertisement:

Peter Douglas Molyneux (born 5 May 1959, last name pronounced like "moly-new" in case you were wondering) is a British game developer that help found three different game studios; Bullfrog Productions, Lionhead Studios and 22 Cans. He is seen as one of the greatest game design pioneers of the 1990's and the British gaming scene in general, having won many notable awards including the Lifetime Achievement Award by the Game Developers Choice Awards, a BAFTA Fellowship at the 2011 British Academy Video Games Awards and has an OBE.

Peter Molyneux began his career in 1982 by distributing and selling floppy disks which contained game compilations for Atari and the Commodore 64, which got him interesting in trying his hand at making a game of his own. As such, his first game was a self-published text based simulation game about running a fledgling company called The Entrepreneur, released in 1984. Peter was sure it was going to be an instant classic and after publishing an advert in a magazine cut a "bigger letterbox" for all the orders that would surely flood in; but the game only sold two copies (one of which Peter suspected was bought by his mother). Discouraged, Peter joined with his friend and business partner, Les Edgar to start up a company to ship baked beans to The Middle East called "Taurus Impex Limited". Commodore International (same company behind the Amiga and Commodore 64) mistook the company for TORUS, a networking software company, and gave the fledgling company ten free Amigas. After clearing up the confusion (yet after taking the free hardware) Taurus designed a database system for the Amiga called Acquisition — The Ultimate Database for The Amiga, which saw a modest financial success.

Using the money gained from Acquisition Les Edgar and Peter founded Bullfrog Productions in 1987. Peter kickstarted the studio by pulling off another impressive feat of salesmanship; namely by convicing the studio Firebird to let Bullfrog handle the Amiga port of Druid II: Enlightenment (Peter freely admitted in later interviews that he pulled it off by greatly exaggerating his game programming experience). What would be the studio and Peter's real breakout project, however, was creating the "God Sim" genre with the game Populous. The game realized Peter's dream of creating an instant classic with over four million sold. Bullfrog would over the years continue to release several games that would be considered classics on the PC platform, including a sequel to Populous, Theme Park, Magic Carpet, and Syndicate. In 1994 Peter became an Electronic Arts vice-president and consultant, after EA bought a significant share of Bullfrog. And in 1995, EA would outright acquire Bullfrog. Molyneux, meanwhile, felt dissatisfaction with his position, as he disliked the more corporate aspects of it, and he left the company in 1997, with his last title being Dungeon Keeper, to found a new studio; Lionhead Studios.

Following up on the God Sim, Lionhead's first game was Black & White, Peter personally funded $6 million to develop the game, the game released in 2001. In 2004 the company started the Fable series exclusively on the Xbox. In 2006, Lionhead was bought by Microsoft Studios. In 2010, Molyneux demoed, the then new, Kinect with Project Milo. Project Milo was stated to be a whole new virtual experience with the eponymous character learning complex social mannerisms and developing the more you played with him. There was some confusion over if this was just a demo or an actual game; Molyneux said it was while Microsoft said it wasn't. Project Milo disappeared and it was later revealed that elements of it were used in Fable: The Journey. Meanwhile, history was about to repeat itself; Molyneux once again found himself with increasing corporate responsibilities as the head of a increasingly commericalized studio, an area which he disliked working in. And once again he took the consequence.

In 2012, Molyneux left the company to start a third company, 22 Cans. 22 Cans released the "video game" Curiosity – What's Inside the Cube? an experimental title that promised a life changing prize for the player that opened the cube. The prize turned out to have part of the profits, some creative control and god-like powers in their next game, Godus (although none of these things have come to pass). Godus once again saw Peter returning to the God Sim, but this time using money raised via Kickstarter.

Molyneux himself is a polarizing figure in the industry; this is in no small part due to the passionate speeches he gives about each of this games. In short he often oversells what the games can actually do, leaving players to feel cheated when they finally play the game; both the Black & White and Fable franchises suffered from this. Jim Sterling even came up with the "Molyneux Cycle"

◊ to describe his habit of overhyping the game, then when it comes time for the sequel, feigns Creator Backlash over its predecessor and oversells the sequel. In response to getting called out on this by various journalists, Molyneux, while still active on developing gaming, has since stepped back from the public spotlight.