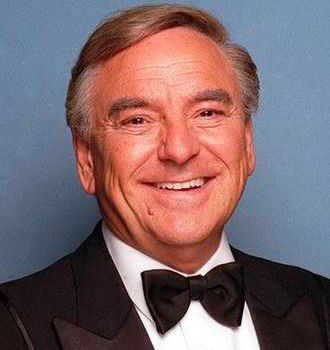 When I was at school and I said I wanted to be a comedian, everyone laughed at me. Well, they're not laughing now.
Advertisement:

Robert Alan Monkhouse (1 June 1928 – 29 December 2003) was a British stand-up comedian, prolific Game Show host and comedy writer. He rose to prominence in The '50s and was still going strong more than four decades later (joking that his 70th birthday celebration programme was actually a hastily re-titled funeral celebration). This became Harsher in Hindsight as he died only a few years later from prostate cancer in 2003, at the respectable age of 75 but only shortly after his older friend Bob Hope, whom he had spent years writing for. After his death, CGI technology was used to allow his image to star in PSAs raising awareness of prostate cancer - these were praised for being one of the first examples of such a "resurrection" that didn't slip into the Unintentional Uncanny Valley. invoked

As well as hosting over 30 British game shows, he also worked as a comedy actor, although in his more serious roles he tended to get typecast as the villain - he joked that "I'm always cast as the sort of man who would keep his cocoa warm by burning down an orphanage", and cited Sylvester Le Fley from Jonathan Creek as an example.

He was also a fan of silent films and possessed an extensive obscure film collection, as well as a vast library of archive TV shows, which was examined after his death and found to contain many programmes that no longer existed in the official archives.

He also kept records of every joke he'd ever told, in large notebooks. When these books were stolen (and later recovered) the theft was jokingly attributed to "the Thief of Bad Gags".