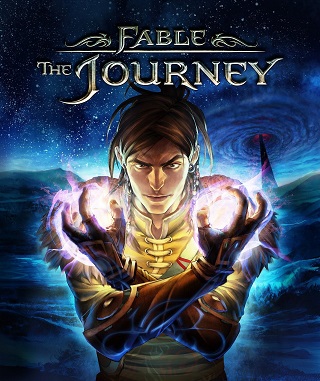 "Without sacrifice, there can be no victory."
Advertisement:

Fable: The Journey is the fifth chronological entry to the Fable franchise, created by Lionhead Studios and released for the Xbox 360 Kinect in 2012.

Decades after the events of Fable III, we find ourselves following the exploits of a young Dweller named Gabriel. During a storm he finds himself separated from his convoy and forced to take a longer route home by himself. Early in his journey he encounters a Blind Seer injured on the road being pursued by an evil entity.

Deciding to rescue her, and narrowly escaping her persuer, he learns that her name is Theresa. She reveals she is on a quest to defeat the monster's master, an Eldritch Abomination known as The Corrupter. Soon Gabriel finds himself on a journey to save all of Albion with only his horse, Seren, and Thersa to aid him.

Due to being a Kinect-only title, the mechanics are of course a major departure in gameplay from the standard Action-Adventure you'd normally expect from the Fable series. The game takes place from a First Person perspective whilst traveling across Albion in your carriage and engaging enemies on foot. The player utilizes various motion controlled magical powers in The Journey's combat and puzzle-solving. For more information on the characters that appear exclusively in this title, see the game's character pages.