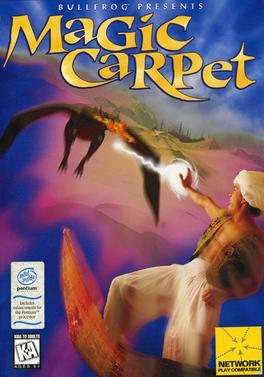 Magic Carpet was a videogame released in 1994 by Electronic Arts and developed by Bullfrog Productions (The same company that worked on Theme Park and Theme Hospital).
Advertisement:

The story begins with a narration which acts as a prologue to the main game itself. Due to colonization and expansion, wizards have been collecting a magical substance known as mana. Mana is versatile and immensely valuable to wizards, so it was harvested until there was no more left in the world. Wizards battled fiercely against each other in order to claim the mana for themselves. Some wizards summoned monsters to aid them but the monsters turned against their masters.

In the end, one wizard cast the ultimate spell in order to end the conflict once and for all. Unfortunately the spell was too strong and so the wizard perished. It's now down to his apprentice (that's you) to bring about order in the land.

In terms of gameplay, Magic Carpet is a First-Person Shooter with a heavy emphasis on magic. You have a supply of mana which dictates what spells you can use and how long for. Collecting mana increases your mana bar, which allows you to cast more spells without having to recharge. At the start you may only be able to throw a few fireballs but later on you can hold down the mouse button on spells such as Rapid Fireball and Lightning in order to deal more damage for a longer period of time. In the late stages of the game you can throw Meteors and summon Volcanoes which deal an enormous amount of damage.

Basic tactics involve casting the 'Castle' spell which allows you to create a fort of your own where your mana will be stored. Hot-air balloons of your colour will periodically set out from your castle and bring 'claimed' mana to your castle. To claim mana you need to cast the 'Possession' spell (which can also be used on buildings for a slight mana boost).

There are twenty four spells in the game, most of which are destructive abilities but there are some which can be used in interesting ways. 'Fools Mana' creates fake mana which will act as a trap and cause damage to whoever tries to claim it. The player can also create a 'Skeleton Army' which will attack all castles on the map (including your own!).

There was also an expansion called Hidden Worlds which had a snow tileset and swapped the rarely used Flamewall spell for the altogether more useful Homing Meteor spell. A sequel titled Magic Carpet 2: The Netherworlds was released in 1995 and contained new monsters, night levels, caverns and a variety of different changes to spells (particularly they all have three different levels of power). The game was on several systems and was ported to the Sony Playstation.