Death Is a Slap on the Wrist 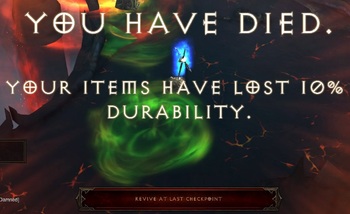 Who cares about your charred, horribly disfigured remains? Your sword just got slightly rustier!
[sigh] "How many times must this fool die?"
— Morte after the player has died repeatedly, Planescape: Torment
Advertisement:

In most video games, when you die, there is a penalty. However, this trope is about how in some games death is nothing more than a minor obstacle, a slap on the wrist, and not something to ever worry about, even for the worst of players.

Death may be there just for formality's sake. For example, the makers of Prey (2006) and BioShock both said they didn't want to interrupt the narrative by forcing players to redo sections of the game they are poor at, so they gave you unlimited lives with no requirement to retry what you failed at. Some cooperative games, online or otherwise, use unlimited lives to keep the party going. For example, the offline mode of Serious Sam has a "come back to life where you last saved" system like most First Person Shooters. However, if you're playing online cooperative mode, you come back to life on the spot when you die, and can do this infinite times, essentially transforming the game from a challenge into a party.

There's been a noticeable progression of this trope in the MMORPG genre, starting with the first Multi User Dungeons. Early MUDs and MMOs tended to carry a steep death penalty in terms of lost Experience Points, Character Levels, or even most or all of your character's gear. Later games have gradually reduced or eliminated the penalties in order to appeal to more casual gamers, although some still offer a "hardcore" mode that preserves some or all of them, up to and including a Final Death Mode.

Dying without penalty is very common in games today in order to ease frustration of players that may repeatedly die and is also present in games where dying is very common due to the game being brutally difficult. Dying in a game nowadays tends to be quick and the player can return in a just as quick manner without the flow of the game being bogged down by restarting from the last checkpoint or the start of the level.

A notable consequence of small or nonexistent death penalties is that there may be occasions where dying becomes beneficial. If you're playing a game where the only penalty for death is going back to your last checkpoint and your next objective requires you to go back there, the quickest way to get there is often in a body bag. Intentional death is often used by speedrunners to gain an advantage in these situations. Some games may also restore your health when you die, leading dying players to succumb on purpose so that they can get a fresh start.

This tends to happen if the player is playing an arcade game and is emulating it and the game doesn't send them back upon death, as the player can just insert one of their imaginary coins with the push of a button and easily get as many credits as the game will allow. Lives system and no penalty also became more common in platformers on flash and other indie games since the early 2000s where it spread to mainstream games.

A sister trope to Meaningless Lives, where the player theoretically has a limited number of lives, but there's enough that running out is nearly impossible, or/and you don't lose much at all if you do. Contrast Continuing is Painful, where you lose a lot more than expected should you decide to keep going after you lose. Contrast Checkpoint Starvation, where lack of check points results in going back really far after dying. Contrast Killed Off for Real, where dead characters stay dead (although in the case of party members, they may be easily replaced). Compare Death Is Not Permanent and Death Is Cheap, which are non-gameplay equivalents to the same trope. When this applies in the afterlife, as in the myth of Valhalla, see Warrior Heaven or Hell Is War.