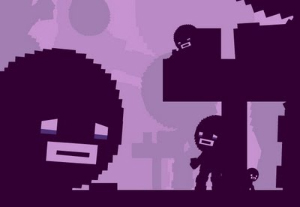 Get in the fcuking box!
Time Fcuk is a play on how if one changes around the letters in a word even though it means nothing logically, we all still see it as something that its [sic] not.
Advertisement:

The player character, while idly walking by, finds himself confronted by a strange box. Out of the box comes someone looking just like him, claiming to be him from the very recent future. After telling him to get into the box himself, he forces him in.

He finds himself in a square monochrome hell.

This game is confusing.

Got an updated release along with other games by Edmund McMillen in The Basement Collection.

Has nothing to do with the French Connection UK clothing line, which uses the same joke.