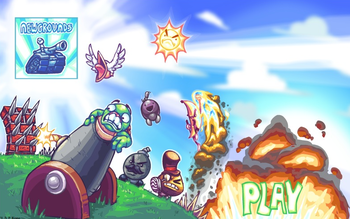 Toss The Turtle is a 2009 online game that is almost Exactly What It Says on the Tin. You shoot a turtle out of a cannon and pepper him with bullets in the hope of getting major distance. Along the way, you can grab cash for upgrades at the shop and ammo for the gun to continue shooting the poor turtle.

You can find it on Newgrounds here

. The artist, Gonzo, has also gone on to create art for another game, Goin' Up.