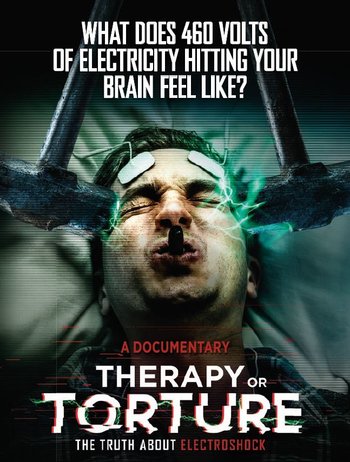 "They strap you down to a special table that flips over. So that you don't choke on your own vomit. Then they inject you with a muscle relaxant. Then they tape electrodes to your forehead and then turn up the juice. When your toes start twitching, that means you're having a major convulsion, which is what they want. It's what they call healing."
— Derek Lord, "Influence", Law & Order: Special Victims Unit
Advertisement:

In fiction, electroconvulsive therapy (also known as "electroshock therapy") has a negative reputation. It's portrayed as Electric Torture done by cruel, quack doctors at Bedlam Houses. It's about as useful as a lobotomy but with the added fear of being completely awake and able to feel the electricity.

In Real Life, electroshock therapy is not nearly as torturous or ineffective as it is in fiction. In most countries, it is administered only under anesthesia over a series of sessions. It is used for a variety of mental illnesses, including cases of severe clinical depression that do not respond to milder treatments.

The treatment is nearly as old as electric power itself, but the brain is complicated. While it generally works, there is still no clear agreement on why it works. For this reason, medical experts have mixed opinions on ECT: some regard it as a last resort as long as our understanding of it remains incomplete. And like any other treatment, it only works when performed properly: accidental misapplication can do serious harm.

Sub-trope to Electric Torture. Compare Electricity Knocks You Out for another misconception about electricity.