Literature / One Flew Over the Cuckoo's Nest 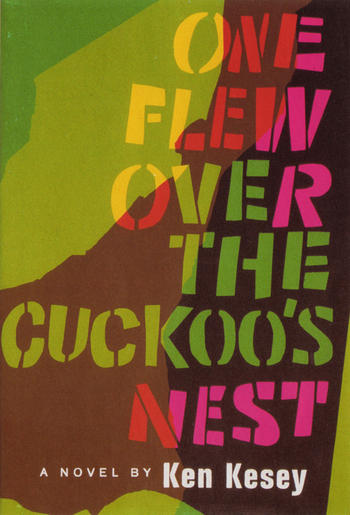 One Flew Over the Cuckoo's Nest, a 1962 novel by Ken Kesey, takes place in an insane asylum run by Miss Ratched, the Big Nurse, who rules over the patients with an iron fist... and her machines, of course, according to narrator Chief Bromden.

She has so much power over them that no one dares to stand up to her, until one day when Randle Patrick McMurphy swaggers into the ward, and things are never the same again as he takes everything the Big Nurse stands for and destroys it right before everyone's eyes.

Was adapted into a 1963 stage play, as well as a critically-acclaimed 1975 movie directed by Miloš Forman, starring Jack Nicholson as McMurphy and Louise Fletcher as Nurse Ratched. The 2020 Netflix series Ratched is a prequel centering on the eponymous character.

"… you think this is too horrible to have really happened, this is too awful to be the truth! But, please. It’s still hard for me to have a clear mind thinking on it. But it’s the truth even if it didn’t happen."