"Wanna hear something cool? Do you know what it feels like to be strangled to death?" 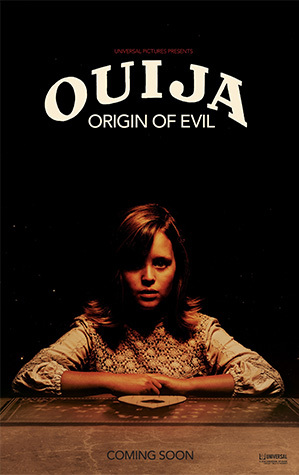 So cute and innocent... for now.
Advertisement:

Ouija: Origin of Evil is a 2016 supernatural horror film based on the board game from Hasbro, prequel to the 2014 film Ouija, and the second film by Hasbro's "Allspark Pictures" studio. Despite being related to a poorly-received horror film, it is surprisingly well-made, courtesy of being written and directed by Mike Flanagan (Oculus, Absentia).

The plot, set in the 1960s, revolves around the Zander family - mother Alice, older daughter Paulina (aka Lina), and younger daughter Doris. With the father deceased, Alice has recruited her children to help run a seance operation out of her house in order to raise money.

When Alice decides to add an Ouija board to the act in order to drum up interest, Doris becomes enthralled with it, discovering she is a gifted spirit medium. She uses her powers to converse with her dead father and to help customers contact their loved ones during seances. But soon, a dark, malevolent entity takes possession of her, and she begins to change - decidedly for the worse.

Please note that since this film is a prequel, spoilers on this page may also spoil twists in the original film.

Paulina as a nightmare where her mouth seals itself shut.

Paulina as a nightmare where her mouth seals itself shut.